BELIZE CITY, Mon. Oct. 23, 2017–The Smart 13 & Under, Mundialito 2017 Closing Tournament had Week 3 games on Saturday, October 21, at the Marion Jones Stadium. There are 12 teams in the competition, and they are divided into two groups of 6 teams each – Group A and Group B, which will each play a single round-robin. That means, regular season for each team is only 5 games, after which the top 4 teams from each group go on to the quarterfinals.

In game 1 this past Saturday, Brown Bombers bombed Sampson Academy, 4-0, with a goal each from Angel Montoya, Delhart Dominguez, Keyden Shaay and Ronald “Gunya” Salvador.

Game 3 was another one-sided affair, as Warriors crushed Corinthians, 6-1, with 2 goals each from Anthony Usher and Jaylen McFoy, and 1 apiece from Robert Fermin and Keifer Perteau; while Corinthians’ only goal was from the penalty spot by George Gabourel.

In game 4, BDF/Ladyville Rising Stars drew, 1-1, with Collet Strikers. Kenrick Gordon, shook the net for Rising Stars, while Aaron Nicholson hit the target for the Strikers.

In game 5, it was defending champs RG City Boys United with the 3-1 win over Hattieville Riverside Boys. Devin Thurton struck twice and Tom Moguel got the other goal for City Boys, while Jayden Brown netted for Hattieville.

And in game 6, Reality Youths and Heights FC played to a 0-0 draw.

Only two more weeks of regular season remain before the Top-4 quarterfinal playoffs. 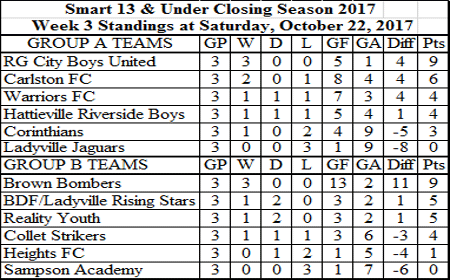