Son shoots father in the head on New Year’s Day 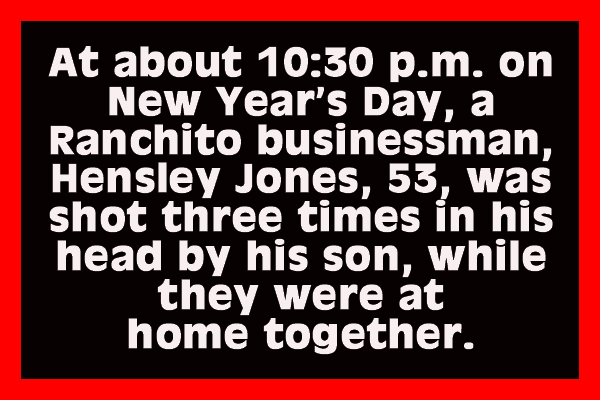 At about 10:30 p.m. on New Year’s Day, a Ranchito businessman, Hensley Jones, 53, was shot three times in his head by his son, while they were at home together.

Police said that their initial investigations revealed that Hensley Jones was in the kitchen area with one of his sons, who shot him twice on the left side of his head and once in the back of his head for no apparent reason then drove off in a brown Isuzu Rodeo SUV en route to Corozal Town, where police later nabbed him and took him into custody.

According to police, they responded to a report of a shooting at Jones’ residence in Ranchito Village, and on their arrival, Jones approached the police vehicle with blood running down his head.

He was immediately taken to the Corozal Community Hospital.

Jones, who is now recovering at the Karl Heusner Memorial Hospital, remains in a critical condition.

Police said that a .38 special Smith and Wesson revolver, with a brown wooden handle, containing 5 live .38 rounds was recovered and has been held as exhibit. They said that no expended shells were recovered from the scene.