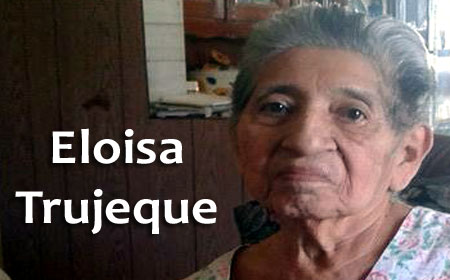 BELIZE CITY, Thurs. May 7, 2015–Well-known educator, trade unionist, and humanitarian, Mrs. Eloisa Santos Trujeque, 77, who had been ailing for the past 6 months, passed away while receiving medical treatment for pneumonia at the Belize Healthcare Partners hospital yesterday, Wednesday.

The eldest child of a family of 9, Trujeque was born on West Street in the Mesopotamia area of Belize City in 1938 and grew up to be an instrumental part of her church and her community during her life.

She was well-respected, and had been involved with St. Ignatius Parish since her youth and later joined two local missionary groups who offered spiritual support to their community and country.

Trujeque started her teaching career at St. Ignatius Primary School on southside Belize City in 1967, where she served as principal from 1968 to 1993.

Apart from being a teacher, Trujeque became a member of the Belize National Teachers’ Union (BNTU) from its inception in 1970, and later served as National Treasurer of that union for 20 years, as well as its first Finance Officer from 1999 to 2005.

In an interview with the media today, BNTU National President, Luke Palacio, described Trujeque as “a dynamic trade unionist who believed in the rights of workers and defending those rights.”

He told us that she came from humble beginnings and learned about responsibility, credibility, trustworthiness and financial management while working with her father at the family grocery shop in her younger years.

Trujeque had also served as the National Treasurer of the National Trade Union Congress of Belize (NTUCB), and according to Palacio, her reputation of honesty enabled her to win numerous elections and remain at the helm of the union, where she was known as the “lady in charge of the money,” and guarded the workers’ dues “with a passion.”

“She always reminded us that the monies are for the members, and was involved in creating the BNTU loan scheme, which is one of the BNTU’s greatest success stories”, Palacio noted.

He added that Trujeque, who was part of the Teacher’s Prayer Group, was involved with the BNTU’s negotiating team which was tasked with hammering out Collective Bargaining Agreements and other agreements with the Ministry of Education and the government, and was instrumental in negotiating the purchase/ acquisition of the parcel of land on which the BNTU headquarters is presently located.

“It is not an easy task to serve on a union [for so long] and stand up for what you believe in, so she will be missed by the entire BNTU family”, Palacio told us.

Trujeque also served as a senior Justice of the Peace (JP) and a Commissioner of the Supreme Court, and won several other awards and merits – including being named a Member of the British Empire (MBE) — in her lifetime.

Her son, Ben Trujeque, told Amandala today that his mother was a very humble, generous individual who liked to read and serve her community by helping those in need.

“She welcomed others with open arms, and was an honorable and understanding person who not only fought for teachers, but also served in the Church, and took it upon herself to cook and feed those in her neighborhood on Sundays”, he remarked.

“Mrs. T,” or “Moms”, as she was affectionately known, also served as a Belize City Councilor under the People’s United Party (PUP) along with the late David Fonseca, and was the chairperson of the PUP’s Order of Distinguish Service (ODS) at the time of her death.

Funeral services for Mrs. Trujeque will be held next Monday, May 11, at 2:00 p.m. at the St. Ignatius Church in Belize City.