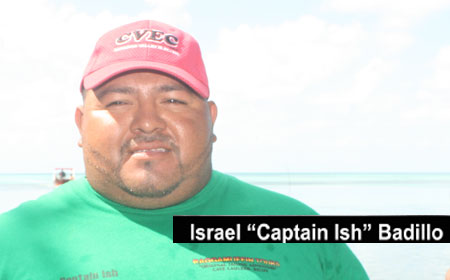 CAYE CAULKER, Wed. Feb. 4, 2015–It is a site that may be unfamiliar to many locals, but the Tarpon View Reserve in Caye Caulker has certainly been growing in popularity over the years as more and more tourists flock to the area to marvel at the breathtaking view of dozens of live, full grown tarpons in their natural habitat.

What makes the location even more attractive is that the friendly shoals of fishes are known to put off an amazing show whenever visitors feed them, by lunging out of the water in dolphin-like fashion.

The area was discovered by the family of tour guide and boat captain, Israel “Captain Ish” Badillo, who told us that years ago, when his relatives decided to investigate the origin of the large amounts of huge tarpons which frequented the mangrove area in the sea behind their yard, they discovered what turned out to be one of the biggest emerging tourist attractions in Caye Caulker.

He said, “This is one of the biggest tourist attractions for Caye Caulker. At first, we started with about six or seven of them, but right now, we have over a hundred of them in the area. We found out that they are bred in one of the largest underwater cave systems in the world. It is about 15 feet at the entrance under the surface, but then it drops down to about 90 feet, and from there, it opens up bigger and separates into different tunnels that lead to different spots in the cave system.” 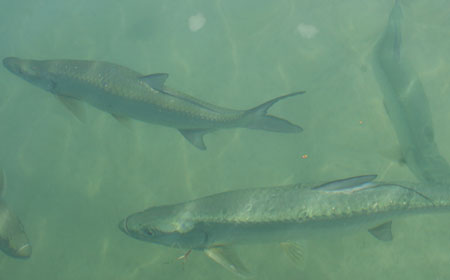 For that reason, international researchers who got wind of the location have visited the site – which is known to have been in existence for the past 4 to 5 years – and are now in the process of conducting studies on the unique cave system which, we are told, extends beneath Caye Caulker and stretches for more than 3 miles north past the popular area known as “The Split”.

The mysterious cave is not without its share of tragedy, however – about a year ago a group of three tourists – who were certified divers, but not certified to conduct cave diving – made an attempt to examine the cave, and only one made it back out alive.

“According to my parents and ancestors, people used to frequently dive the cave back in the days, but there were some people that went into the cave [about a year ago], but they never made it out afterwards because they experienced some problems while in the cave”, Badillo informed us.

Badillo declared that hopefully, in the next couple months, authorities will convert the area into a reserve so that people cannot fish in the area, since there are people – including locals – who still go to the area and fish for the tarpons.

“Nowhere else in the world will you get to see tarpons like how you see them in this area, so we put signs around to protect them, and we also tell people not to fish for them. If they still fish for them, then we try to put a stop to it or call the Fisheries Department to remove them from the area”, he told us.

The Caye Caulker native mentioned that the site is also a habitat for other sea creatures, such as starfish, seahorse and juvenile fishes, and he urged his fellow Caye Caulker residents to do as much as they can to protect and preserve what is quickly becoming an added tourist attraction for the island known as La Isla Cariñosa.