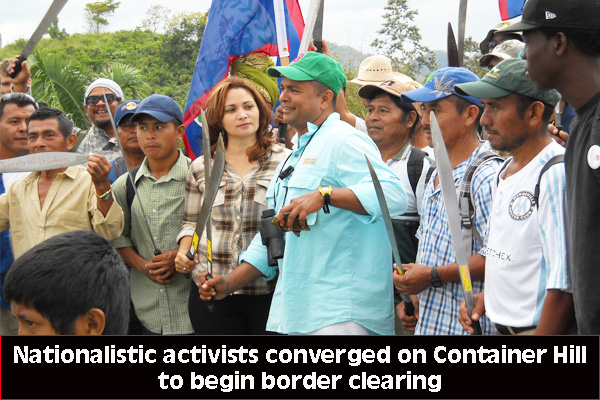 Despite the best efforts of the Government of Belize, in the person of Minister of Foreign Affairs Wilfred Elrington, to scare Toledo activist Wil Maheia, his group, the Belize Territorial Volunteers (BTV), and other interested persons who had announced plans to go on Saturday, March 2, to the Belize-Guatemala border and clear a 3-foot path along a borderline that reportedly had been used previously by British soldiers, the exercise, dubbed “Clearing Our Borderline,” has been declared a success, if only symbolically.

The declared intent of the group was to cut a 6-mile path in this, their first attempt, beginning with Jalacte, and to do the rest of the border in stages. In fact, only 500 feet were cleared by the approximately 150 persons who “roughed it” to the area and converged on an area dubbed “Container Hill,” which is about seventy-five meters from the border.

This was reportedly because much of the time was spent observing the historic occasion through speeches, the holding of hands, the observation of a moment of silence, the partaking of light refreshments, and the relishing of entertainment by drummers from Punta Gorda, who also travelled to the area to mark the importance of the moment.

There were no incidents and no hostilities, although the trek to Container Hill had some minor challenges. There were some hills to traverse. The slopes were slippery, and there were some soft areas, which were muddy.

While traversing this muddy area, a horse and its owner fell down, when it lost its footing, causing a nearby observer, to say “Boy, if horse, a four-footed animal can fall in this area, what about me, who’s only got two feet?”

The owner got off the horse, took off the saddle, and helped the animal back on its feet, after which they walked the slippery slope.

On arrival on Container Hill, Jose Chen, a resident of Punta Gorda, originally from San Luis, Guatemala, the town neighboring Jalacte, who was returning from San Luis, told the crowd that two truckloads of Guatemala soldiers, dressed in black, with guns, were on the road in an area not far from the crowd, and that they were alert and ready.

Omar De La Fuente, from the Orange Walk contingent, along with members of COLA and others, went down the hill and spoke with the villagers, including the mayor of San Luis and a representative of the Organization of American States (OAS), who had come to the area.

De La Fuente reported that the OAS representative said that he came with the Guatemalan soldiers to ensure that there were no problems. He was instructed to keep a distance, and the soldiers were to be about a 100 meters behind him.

He then invited the group to come down to the area. Some people went down the hill and there was interaction with the local villagers, and the villagers then came up to Container Hill, where they continued to interact with the activists.

However, Wil Maheia said that there was some intimidation of the people of Jalacte village, the Belizean village on the border with Guatemala, which prevented many from joining the crowd to go to Container Hill.

It was noted that large tracts of land were cleared and corn fields planted, but the fields were for Guatemala farmers who came across and planted in our territory.

Maheia emphasized that there continue to be major incursions into Belize, unhindered.

A villager of Jalacte told Amandala that he came to clear the border because the Guatemala farmers have been saying they don’t know where the border is, and so they come into Belize territory to plant, but if the border is cleared and defined, that would eliminate the problem. The villager said that the Guatemala farmers were taking away their land in Jalacte.
Among the brave crowd that travelled from different areas to the border area in Jalacte were Nigel Petillo, president of the grassroots organization BGYEA; the PUP’s Dickie Bradley and Carolyn Trench-Sandiford; Giovanni Brackett, president of COLA; and other executive members of the organization, including Jihad McLaren.

Also at the border for the memorable and historic occasion were staff members from the University of Belize (UB), and well-known individuals from Orange Walk, Belize City and other areas, including Omar De La Fuente, Emerson Guild, Paco Smith, and the original members of the Belize Territorial Volunteers, among many others, including retired, able-bodied Belizean army veterans (most notably, Major Lloyd Jones), reportedly skilled in GPS reading, tracking and other military exercises.

In an interview with Amandala on Container Hill, Emerson Guild said that he considered the clearing of the border very important because it demonstrated that the border existed, despite what was said by some people, including Foreign Minister Elrington.

Elrington had famously declared last year that the Belize-Guatemala border was “artificial,” and in trying to prevent the group from going to the border, he had said to the media last week that “no one knows where the border between Belize and Guatemala is,” despite the fact that an “Adjacency Zone” had been put in place by the OAS, which, naturally, had to follow the borderline as it exists between the two countries.

In fact, at the conclusion of the border clearing exercise, the President of Guatemala, Otto Perez Molina, told the Prensa Libre, a prominent national newspaper of Guatemala, yesterday, Sunday: “The act is a provocation promoted by a small group of people, but the Guatemalan government will not respond to the move. They can do what they want in their country to the extent that their country will allow them.”

Long ago, Guild said, Belize National Hero, the Hon. Philip Goldson, had said that the time to save your country is before you lose it. He was there, Guild said, to save his country, to show that the border does exist, and that he and other nationalists would defend the country with their lives.

Giovanni De La Fuente of Orange Walk Town said that, in going to clear the border, he was representing the many Belizeans who could not make the journey for various reasons.

Manuel Williams of Hopeville said that he went to clear the border because it was important to do so, because he does not want the Guatemalans to creep slowly into Belize.

Major Jones affirmed that the volunteers were on the Belize side of the border and it should not be a cause of concern, because they came peacefully. He said that clearing the border is complex, and must be done in collaboration with Guatemala, and that the exercise cannot be done using eyesight alone as a guide, due to errors, and confirmation of the line must be done dually, by Belize and Guatemala.

Carolyn Trench-Sandiford said that she joined the volunteers because she believes that each and every Belizean has an obligation to protect and defend our country. If it is not done now, the future generation will not have a country; clearing the border is very important, so that people can know what they are defending, she said.

She said that our Constitution is very clear about what and where the border is, and that the survival of the country is presently dependent on the people.

Wil Maheia said that there is a border, and that clearing it can be done, as what is now being done has demonstrated — that it is not an impossible task. Large tracts of lands have indeed been cleared, not by Belizeans, but by Guatemala farmers who are planting illegally in our country, he said.

Richard “Dickie” Bradley, a Channel 5 talk show host and former PUP Minister of Government, said that he went to help clear the border to show that Belizeans have the right to walk along the border without fear. He said that Hon. Philip Goldson said that Belize belong to Belizeans. He is now disappointed, he said, that just a few years after Hon. Goldson’s death, there are now doubts and questions as to whether this is our country.

Many other speakers addressed the gathering to mark the historic occasion, including Paco Smith, former mayoral candidate for the independent VIP party, who said that Belize is for Belizeans, and took a “no” stance to the prospect of arbitration by the International Court of Justice (ICJ).

When we got Independence in 1981, all our territories were intact, and now going to the ICJ would be like gambling with a man who does not have anything to lose, Smith said.

The crowd was resolute but respectful, and Maheia said that this symbolic clearing will be followed by other similar exercises. He said the villagers along the border would be engaged, and residents would cut a clearing along the border from village to village, until the entire border is cleared.