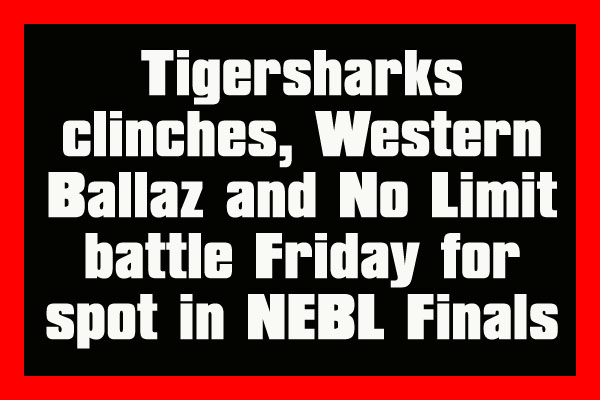 Two semifinal Game 2’s were played on Friday night, May 30, one in Belize City, the other in Belmopan; and one semifinal series is over, while the other needs a Game 3 to decide who goes to the “Big Dance” in the Finals of this inaugural 2014 National Elite Basketball League (NEBL) tournament.

Out west at the UB gymnasium in Belmopan, the visiting San Pedro Tigersharks made it two in a row, as they sealed the deal on the Belmopan Point Bandits, handing them their second loss with a 78-71 score. Leading the Tigersharks were Tyrone Edwards 22 pts 6 rebs, Michael Adams 15 pts 11 rebs, Jamal Kelly 14 pts, and Winston Pratt and Louis Pitterson with 7 pts 7 rebs each; while the Point Bandits were led by Erwin Robinson 13 pts, Jamal Harris 12 pts 7 rebs, Adam Carswell 11 pts 11 rebs, and Shen Li Arnold 10 pts. San Pedro had won Game 1 the previous weekend, 79-60, in San Pedro in the best-of-3 games semifinal series; so they have clinched the series, 2-0, and will take their place in the Finals, where they await the other semifinal series winner.

Here in Belize City, the visitors were again successful, as the Cayo Western Ballaz avenged their 82-60 Game 1 loss to Belize City No Limit in San Ignacio last week, as they pulled out a hard earned 64-62 win in Game 2 at Bird’s Isle, to even the series at 1-1. Missing from the Western Ballaz line-up in their Game 1 loss was forward Richard Troyer, who was reportedly out of the country; he led the way in their Game 2 victory on Friday with 20 pts 12 rebs 5 stls, along with Travis Lennan 18 pts 8 rebs, Kurt “Chengo” Burgess 16 pts 10 rebs, and Farron Louriano 10 pts. For No Limit, Elsworth Itza was high man with 15 pts 10 rebs, Gregory “Chippy” Rudon had 12 pts, Brian White 8 pts 7 rebs, and Matthew Young 12 rebs.

The decisive Semifinal Game 3 will see the return to the No Limit coaching staff of Matthew Smiling, who was out of the country for Game 2 on Friday last, but is expected back in time for this coming weekend’s blockbuster in San Ignacio.

Semifinal Game 3, Cayo Western Ballaz vs Belize City (Smart) No Limit will tip-off at the Sacred Heart Auditorium in San Ignacio this weekend on a day and time to be announced.

The winner will then go on to face the San Pedro Tigersharks in Game 1 of the best-of-3 Finals series at the R. Angel Nunez Auditorium in San Pedro, Ambergris Caye.