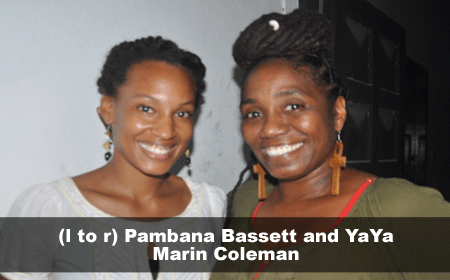 BELIZE CITY, Thurs. July 27, 2017–The UBAD Educational Foundation has put together a series of activities to commemorate the 179th anniversary of Emancipation Day on August 1. Amandala spoke to UEF Chairperson YaYa Marin Coleman and member Pambana Bassett on the significance of Belizeans observing Emancipation Day, the abolition of legal enslavement.

Bassett said that they are excited because this is the fourth year that UEF has planned activities for Emancipation Day.

“It is 179 years since the legal proclamation that ended the legal enslavement of our African Ancestors in Belize by the British imperialists, formerly British Honduras, which was colonized brutally by the British. For this year we have a number of activities. The first activity is a midnight mass at the Queen Street Baptist Church, and the second action is a paper boat launch, the Emancipation Homecoming, in honor of our ancestors and the forced crossing. The third event is the Emancipation Day Lecture, which is more of a gathering of people coming together to recognize both the brutality against which our ancestors struggled and also their unfaltering journey to fight for emancipation which is on-going today,” Bassett said.

Bassett added that the guest lecturer for this year is Dr. Patricia Rodney. Dr. Rodney, an expert in public health, is the wife of the assassinated Guyanese historian Dr. Walter Rodney, the author of the seminal work “How Europe Underdeveloped Africa.” Dr. Walter Rodney was killed in his native Guyana when agents of the Forbes Burnham government placed a bomb in his car.

Bassett said that Dr. Rodney is based in Atlanta, Georgia, but is a transnational person who is originally from Guyana, but has spent many years in Tanzania and Jamaica.

Amandala asked Ya Ya Marin Coleman why we should care about Emancipation Day in Belize.

“Yu si how we the live right now, that is because we are disconnected from our ancestral history, knowledge, ritual, practices. There is a whole bunch of us that are Afro-Saxons: black skin, white mask. It means that our values that we uphold are European values, like our religious values, the names we have, the way we are dressed, our thoughts about our own blackness is often filled with self-hatred,”

Ya Ya went on to explain that our history did not begin with our enslavement. “We were the first human beings on the planet. We are coming full circle. You should care, because many of us are living in poverty, many of us don’t have equal and fair access to health care.

Ya Ya said that all Belizeans are welcome to commemorate Emancipation Day, particularly black people.

Ya Ya said that this year’s Emancipation Day celebrations is being made possible through the partnership of UEF with Sugarfix, Museum of Belize, Image Factory Art Foundation, Angelus Press, Krem Radio, Amandala Press, Krem TV, Institute of Social and Cultural Research, National Heritage Library, Angelus Press and The Ministry of Foreign Affairs.

The theme of Dr. Rodney’s lecture is Healthcare in Belize since emancipation with a focus on Afro-descendants’ health.