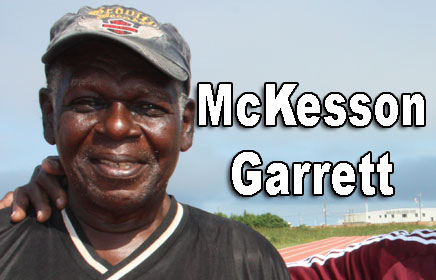 BELIZE CITY–On the night of Friday, July 4, 2014, three dogs attacked and killed Jeffrey O’Brien, 23, a fisherman of Independence, and 15 days after, on Saturday evening, July 19, an eerily similar incident occurred, in which a senior citizen was attacked and viciously mauled by four Rottweilers.

The victim of this attack, McKesson Garrett, 71, of Belize City, at about 7:30 that evening, was bitten on the hands, arms, legs, and foot, and a piece of his nose was ripped off by the dogs. He was admitted to ward at the Karl Heusner Memorial Hospital, and remained there until he died at about 2:00 Sunday morning, September 14, two months after the mauling.

McKesson Garrett was attacked by the dogs at the home of a friend of his at Mile 4 on the Philip Goldson Highway.

Shannon Perrera, Garrett’s common-law wife, in an interview yesterday with Amandala, said the wounds were terrible and were not healing. Garrett was taken frequently to the operating theater where doctors carried out deep cleaning and scraping of the wounds.

However, Garrett died of infection, of water in the lungs and cardiac arrest, Perrera said. She is not claiming negligence on the part of the hospital, because the doctors and nurses did what they could for him, said Perrera.

Perrera told Amandala that she tried to contact the owners of the dogs, but was chased away and directed to the owner’s attorney, even though the owner and Garrett had been friends for over 40 years.

Garrett, who had served several years as chairman of the Belize City branch of the Belize Ex-Servicemen’s League, had told Amandala that the day of the attack had been his birthday, and his friend had invited him to his house and had released the dogs in the yard.

But after his visit, as Garrett was walking out of the yard, the dogs, without provocation, attacked him and began to bite him, in the presence of Garrett’s friend, the owner of the dogs, who appeared powerless to help Garrett, because he could not control the dogs.

Garrett tried to defend himself and took cover in a body of water that was in the yard, but the dogs waited for him to emerge so that they could attack him again.

While he had been in the water, Garrett had started to feel pain due to the numerous bites he had suffered.

At this point, neighbors came to the area, and along with Garrett’s friend, managed to subdue the dogs.

Garrett had told Amandala that he had contacted an attorney to seek a settlement for his serious injuries.

A big question is why the police had not made a report on the attack.

Funeral arrangements have not yet been made for McKesson Garrett.