Watchman’s killer shot him in the eye 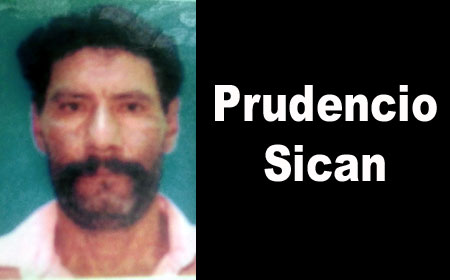 BELIZE CITY, Mon. July 27, 2015–On Sunday, July 26, at about 11:43 p.m., Ladyville police responded to a report of a shooting and they visited a house located off a feeder road about half a mile from Bacab Eco Park, where they found a man lying face-up, dead. He had apparently had been shot in his right eye.

This latest Belize District murder victim would later be identified as Prudencio Sican, 47, a Guatemalan national who was employed at Bacab as a handyman and watchman.

Amandala spoke to the investigating officer from the Ladyville Police Station, who told us that a single gunshot was heard in the area and when Sican’s relative visited him during the night, his lifeless body was found.

Police have also not recovered any expended shell casing, which adds more challenge to their investigation.

The police investigator said that they have still not been able to establish a motive for the murder; neither have they been able to take anyone into custody for questioning. “But we are canvassing the area to see what we can find out,” the officer said.

Police, who initially referred to Sican as “Prudencio Gonzalez”, say that the shooting occurred at about 9:00 Sunday night.

Gina Smith, daughter of the proprietor of Bacab Eco Park, told Amandala that Sican was her father’s “right-hand man”.

Smith said that Sican had worked with her father for about 10 years and was a much respected worker, who was well-liked in the area.

Bacab Eco Park issued a press release this afternoon on the murder of their employee.

The release said: “Bacab Eco Park is deeply saddened by the untimely death of Prudencio Sican, a very faithful and long standing employee and friend, who was killed in his home in Burrell Boom, sometime between 9 and 10 p.m.”

The release added: “The senseless and unwarranted action against a hardworking, skilled and versatile person leaves a hole in the fabric of our society.”

Sican was married and his mother and other family members are living in Belize.