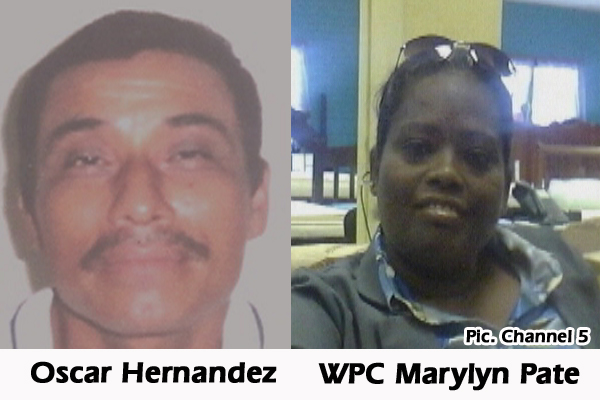 Man she had gone to arrest chopped her a number of times, then ran

Marylyn Pate, a female police officer attached to the Orange Walk Domestic Family Unit of the Orange Walk police, escaped death after she was chopped three times in the head and two times on the hands by a man she had gone to detain at his home in Trial Farm Village on reports of child molestation made by the Human Services Department.

Oscar Hernandez, whom WPC Pate, along with other officers and personnel of the Human Services Department, had gone to arrest, told her that he would come with her to the station, but that he first had to go into the house to get dressed.

Hernandez indeed went into the house, but not to get dressed; he came out with a machete, charged at WPC Pate and chopped her several times on the head and hands.

Hernandez then ran out of the yard. The incident occurred about 2:30 Thursday on a street that extends off East San Martin Street in Trial Farm Village.

Orange Walk police have launched a manhunt for Oscar Hernandez (also known as Oscar Perez), 44, a Belizean of Zericote Street, Trial Farm. He is wanted on charges of attempted murder, dangerous harm and other relevant charges.

Information to us is that WPC Pate went with two officers in a red pickup truck to Hernandez’s house. They stopped by the gate, and WPC Pate and the two officers got out of the vehicle and went to the gate.

Hernandez, who was at home, went to the gate, where WPC Pate and the two officers talked to him. Hernandez then went back into his house and the officers entered the yard and stood under a tree.

Police reports are that Hernandez, armed with a machete, came running out of the house towards the three officers, attacking Pate.

An eyewitness to the incident said that he quickly dialed 911 and called police, but the two officers who were with the police woman quickly put her into the pickup and took her to the hospital. Hernandez, meanwhile, had run out of the yard and escaped.

Inspector Cantun said that WPC Pate was kept in the hospital, where a series of tests and checks were carried out, including X-rays. She also had to undergo a CAT scan so that doctors could confirm that her brain was not injured. The preliminary X-ray which was done showed that there were no serious injuries to her brain and skull. The doctors have requested that further examinations be conducted.

Police told Amandala that Pate is recovering well and has been released from the hospital.

Oscar Hernandez is on the run, trying to evade the police manhunt that has been organized.

Cantun said that Hernandez is considered armed and dangerous, and citizens must exercise all necessary precautions when approaching him or dealing with him. If he is seen, individuals are urged not to approach him, but to call the police.

Deputy Commander Cantun said that Hernandez has relatives in Trial Farm, in August Pine Ridge Village, and also in Botes, on the Belize-Mexico Border, across the river from Santa Cruz.

Police have contacted the Mexican authorities and requested that they arrest Hernandez on the basis of a warrant and poster provided to them.

Anyone with information on the whereabouts of Oscar Hernandez, also known as Oscar Perez, is urged to contact the nearest police station.