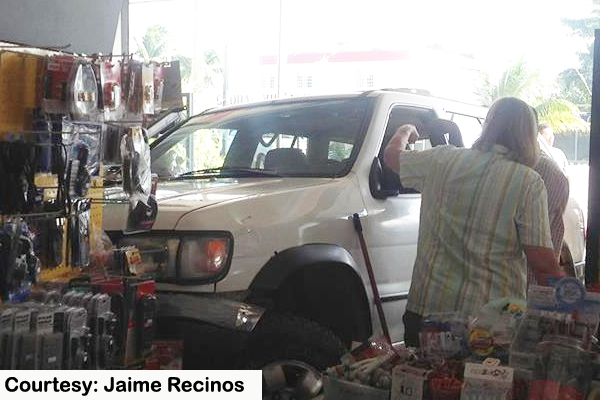 It looked like a scene out of a movie – an SUV smashed through the glass wall of a supermarket in Ladyville, leaving half of the vehicle in the store and the other half outside on the pavement. The accident occurred at about 3:30 yesterday afternoon.

Luckily, no one was injured, but the vehicle slammed some goods off a shelf in Sky City Superstore, knocked down a 5-gallon water rack containing about twenty bottles, bursting some of them, among other damages.

The vehicle, a Nissan Pathfinder with L/P- CY- 31479, which carried a Belize Wild Life and Referral Clinic logo on the right back glass, ended up parked on top of the water rack.

The woman who was driving the SUV was detained by police, pending charges.

A witness who was standing outside the store told Amandala that the vehicle drove up to the store from the direction of Belize City, and turned into the parking lot of the store.

He believed that the driver stepped on the gas instead of the brakes when she slowed down to get out; the SUV stopped when it hit the water rack.

A worker said that they were all frightened when they heard the loud crash.