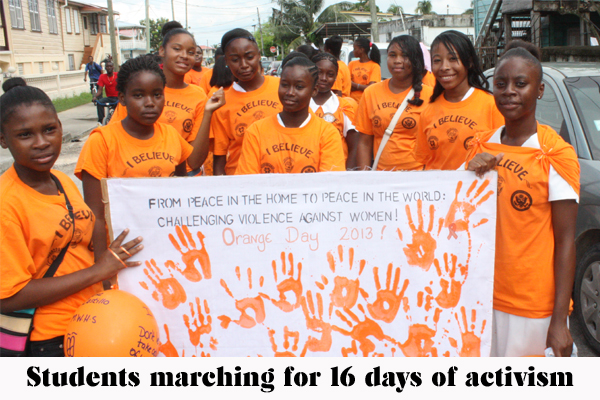 Today, Monday, November 25, is Zero Tolerance for Violence Against Women and Girls Day. It also marks the first of 16 Days of Activism to end gender-based violence against women; and this morning, in a show of solidarity for the initiative, about 26 female students from Maud Williams High School and Sadie Vernon High School in Belize City took to the city streets to march and bring awareness to the incidents of violence against women and girls.

The 16 Days of Activism is part of an annual calendar of events which are organized by the Women’s Department to promote awareness on the issue of domestic abuse, which unfortunately has been increasingly prevalent in our society. The initiative coincides with Women’s Month and therefore, activities are being held countrywide to educate the public as well as to celebrate the role of women in our communities.

On Friday afternoon in Belize City, the Women’s Department kicked off the 16 Days of Activism –which runs from November 25th to December 10th – by holding a brief opening ceremony, followed by a motorcade through the principal streets of Belize City.

During the march today, all the participants wore orange T-shirts, carried orange balloons and chanted slogans in support of the fight against gender-based violence.

Amandala spoke with Carolyn Reynolds, Executive Director of the Women’s Issues Network, who told us that they wore orange because today is referred to as ‘Orange Day’, and it is being celebrated globally to support zero tolerance against women and girls. Reynolds said that the initiative began last year, and the 25th of every month is recognized as ‘Orange Day.’ She mentioned that they are currently working with the girls of Maud Williams High and Sadie Vernon High School to do a program called “I Believe” in which the students are given educational sessions on different issues, and also do advocacy work, and teach their peers so that they can learn from each other. She told us that as part of the 16 Days of Activism, the students agreed to conduct the march today, and said that they hope to expand the march next year.

Shamika Reyes, a 4th form student at Sadie Vernon High School, told us why she participated in the march: “I feel good about this because it shows young people [like myself] that they do not have to stay in violent relationships, and that there is a way out,” Reyes said. She said that she knows people who are in violent relationships, and that she would like to tell them that there are people and organizations out here who can help them to get out of their situations.

Those organizations include the Women’s Department, the Belize Family Life Association and Haven House.

Gender-based violence is defined as violence that is directed against a person on the basis of gender. It constitutes a breach of the fundamental right to life, liberty, security, dignity, equality between women and men, non-discrimination and physical and mental integrity. It affects a wide cross-section of our populace, and it is considered important for more Belizeans to become involved.

Other activities will be held throughout the country, including an awareness campaign in the Corozal District, an educational forum in the Toledo District, and an information fair in the Cayo District.

The theme this year for 16 Days of Activism is “From Peace in the Home to Peace in the World: Challenging Violence Against Women.”