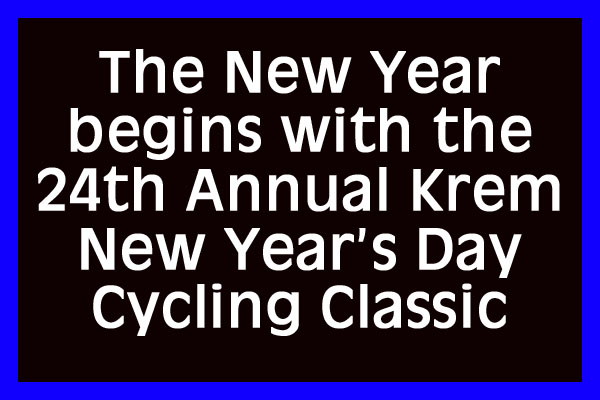 2013 is fast winding down, and the New Year 2014 is almost here, and it begins with the full blown spectacle of the 2nd biggest cycling event in the 2014 calendar – as over a hundred cyclists, male and female, from Youth to Masters, local and foreign, first timers, veteran warriors and past champions are all getting ready to gear down for what has become a Belizean tradition now about to enter its 24th year – the Krem New Year’s Day Cycling Classic.

Coincidentally, the first KREM Cycling Classic, won by Michael “Big Wire” Lewis, took place on New Year’s Day of 1991, the same year that the first semi-pro football season kicked off in Belize. The Premier League is right now in the heat of perhaps its toughest and most exciting race to their playoffs. Playoff bound teams will likely not be finally decided until next weekend, although some teams might clinch a playoff spot from this coming Sunday. But cycling is a different story.

In this Wednesday’s KREM New Year’s Classic, it will all be decided once and for all on New Year’s Day, when fans will welcome the winners as they cross the finish line at the junction of Mahogany Street and Central American Boulevard. The “playoffs,” if there are any, are being decided with registration deadlines and the technical meeting tonight at the UWI campus on Princess Margaret Drive. And all vetted cyclists will get a chance to compete for the prestigious KREM Classic championship which comes along with what is certainly the most enticing package of prizes ever for this race. Where previously the race station prizes only included one of a thousand dollars, there are now four such prizes along the way to the finish, where there is an even bigger bag of prizes for the champion. And there are many other smaller station prizes along the way.

Up to yesterday, there were 73 cyclists, from 7 different teams as well as unattached riders, including 7 riders from Mexico, 2 from Guatemala and 2 from the USA registered in the Elite/U-23/Masters 4/5 category, which leaves from the northern border and travels along the Philip Goldson (Northern) Highway through Corozal Town and Orange Walk Town, and all the villages along the way to Belize City – a journey of 97 miles to the finish line on Central American Boulevard. Defending champion is David Henderson, Jr. who rode for Santino’s last year, but is this year under the Benny’s Megabytes banner. (See Amandala ad “Who will win?” for the list of all past champions of the KREM Classic.)

All the big names in Elite cycling are in the tentative starting list we saw yesterday, though there has been some movement of members from one team to another.

Cayo High Road now features the Choto brothers – Geovanni, Peter, Rafael and Jose, along with Aiden Eimr Juan, Dalvin Cowo, Juan Umana and Brandon Cattouse. (So it seems the C-Ray team is also taking a sabbatical along with Santino’s.)

Western Spirit is now made up of the Troyer brothers – Roger and Richard, the Vasquez brothers – Shane and Ron, along with U-23’s Oscar Quiros, Jr., Deezan Spence and Austin Armstrong, Jr.

The Women, Juniors/Youth and Masters 4/5 in this year’s KREM Classic will all travel the 50-mile journey from Orange Walk Town to Belize City.

The Female race, though so far only including 6 contestants, will feature at least 3 past champions – 2005 champion Marinette Flowers (unattached), 2006 champion Alicia Thompson (Belize Bank Swoosh), and 4-time (2008, 2010, 2011 and 2013) and defending champion Shalini Zabaneh (Sagitun). Other participants include Patricia Chavarria (BECOL), Gabrielle Lovell (Telemedia) and Kerah Eiley (unattached). The Ladies version of the KREM Classic was first run in 2001, so this would be the 14th running of the female KREM Classic. Karen Rosito was the first female champion in 2001.

Fourteen promising young riders will compete in the Junior/Youth categories, and there are 32 competing in the Masters 4/5 category, including 5 Mexicans.

(Note: The final official starting list will be decided at tonight’s technical meeting.)

“From the border to the Belcan!” It is KREM Classic time! Happy New Year to all!!