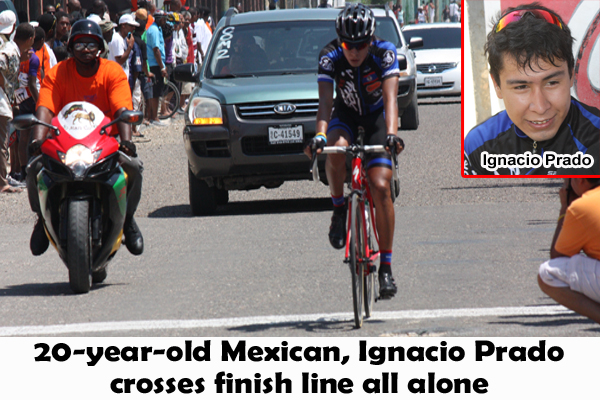 Twenty-year-old Mexican national Ignacio Prado, riding for the Benny’s Megabytes cycling team, rode away from his nearest competitor, Smart cycling team’s Herman “Hijo” Requena, around Mile 4, and made the final circuit around the NAPA and Smart roundabouts to cross the finish line in front of Smart all alone, to claim 1st place in the 33rd running of the Belmopan Cycling Classic, sponsored this year by SMART. Hopes were high for the only Belizean rider in contention as the lead duo neared the City to complete the 100-mile ride; but the Mexican “just walked away” around Mile 4, and there was nothing Hijo could do to stop him. Reportedly, Prado was recently a winner in one of the legs on a tour race in Mexico City.

After the race, we asked the young champion if he will be returning to make a try at the Holy Saturday Cross Country. “Si me invitan,” (If they invite me), he replied. Benny’s Megabytes team manager Perry Gibson was all smiles when we posed the question to him, and also did not discount the possibility that he might also be bringing another foreigner along for the Cross Country. The Belmopan Classic champion is considered a marked man in the Country, being the last major race before the historic Holy Saturday race; and so far, only 3 Belmopan Classic winners have gone on to claim the garland in the Cross Country.

Shalini Zabaneh won the Female race, and Tarique Flowers for the Juniors, who both journeyed to La Democracia, and back for 60 miles.

We will have a more detailed report on the Belmopan Classic in our weekend issue.