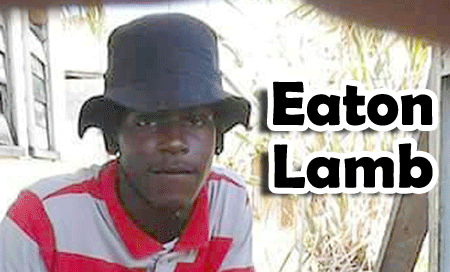 Lamb was rushed to the Karl Heusner Memorial Hospital (KHMH), where he succumbed to his injuries while receiving treatment.

A police report of today, Monday, February 20, says that “at around 11:40 p.m., while police were in the area of Antelope Street Extension, they saw Lamb bleeding profusely, being pursued by 24-year-old Tishawn Hamilton, also of a Pelican Street address, with a knife in his hand. Police quickly disarmed Hamilton and detained him, while Lamb was rushed to the KHMH but succumbed to his injuries at 12:20 while undergoing treatment.”

According to Lamb’s family, there was no indication that the men had any misunderstanding.

Additionally, reports to us are that half an hour before the murder, the cousin visited Lamb’s home twice. Lamb, however, was up the street at another relative’s house.

The cousin reportedly followed him there and choked him from behind, and then stabbed him in the right side of the back.

Lamb ran, but collapsed on the street, with his attacker in pursuit.

A police mobile arrived at the same time and transported Lamb to the Karl Heusner Memorial Hospital; the cousin has been arrested, pending charges.

Lamb was the youngest of his parents’ six children. He was known as a humble, hard-working mason.