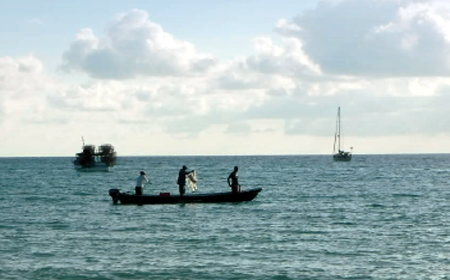 BELIZE CITY, Wed. May 24, 2017–Belize is one of eight countries for which climate change impacts are being highlighted in the first ever Caribbean Marine Climate Change Report Card, providing an example of how climate change is impacting the Caribbean’s marine environment, the threat it poses to communities which depend on marine spaces and resources for their existence, and what needs to be done to address the concerns.

In the case of Belize, there are several communities scattered across its coastline, as well as hundreds of cays dotting its maritime territory. Fishing and tourism are two economic pillars which rely heavily on marine resources, which support the livelihoods of several thousands of Belizeans and also provide a protective cover from the ravages of extreme weather events, which could become more frequent due to climate change.

According to the 16-page report card recently released, climate change has been impacting the health of the Belize Barrier Reef, and it poses a threat to low-lying areas, which include fishing camps.

“In Belize, recent coral bleaching events, associated with elevated temperatures, have been recorded in 1995, 1998, 2005, 2010, 2015 and 2016. The 2005 mass bleaching event coincided with the highest sea surface temperatures ever recorded and led to widespread coral mortality across the region,” the report card said.

It added that low-lying areas in coastal Belize as well as offshore cays are very vulnerable in light of projections that sea levels will rise at an accelerated pace.

“Wave overtopping and wash-over can be expected to become more frequent, which will degrade fresh groundwater resources,” it warned.

In places such as Belize and St. Vincent and the Grenadines, permanent fishing sites are also threatened, since they can become submerged as sea level continues to rise. These camps are also vulnerable to extreme weather events, such as strong hurricanes.

“Since the 1990s, there has been an increase in both the number and strength of storms and hurricanes in the North Atlantic,” the report said, but it noted that, “Some of the most extreme flooding events in recent years have not been associated with hurricane events; rather, they have been caused by extreme rainfall events.”

What could happen in the future? The report projects that, “While the overall frequency of Atlantic storms may decrease in the future, the strongest category 4 and 5 storms may increase by 80% in frequency over the century, with higher wind speeds and rainfall rates associated with these storms.”
According to the Caribbean Marine Climate Change Report Card, 2017, sea level in the region has risen by about 20 centimeters over the past 100 years, which increases the risk of flooding. 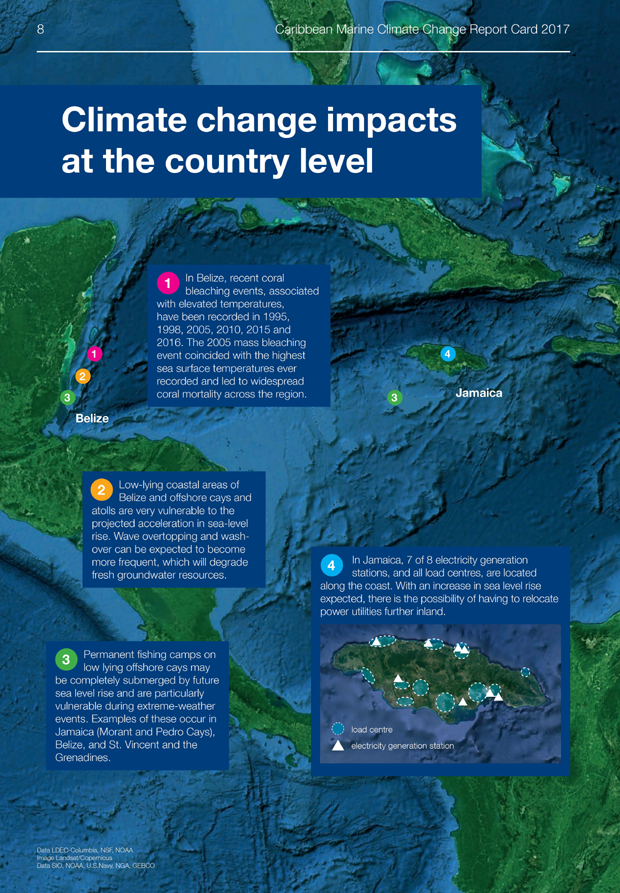 The Caribbean Regional Fisheries Mechanism (CRFM)—which worked with other Caribbean agencies such as the Caribbean Community Climate Change Center, and the Centre for Environment, Fisheries and Aquaculture Science (CEFAS), a marine science and technology agency sponsored by the UK’s Department for Environment, Food & Rural Affairs, under the Commonwealth Marine Economies Programme funded by the UK government—points to the potential impact of climate change on the fisheries sector.

The CRFM cites the warning sounded in the report card that, “Caribbean fisheries are under threat due to changes in ocean currents and fish distribution, and loss of marine habitats. Coastal erosion is also compromising important fish landing beach sites and increasing intensity of storms together with increased sea level causes damage to fish habitats, fishery access and assets.”

The report card also warns that changes in availability of high-value species will have particular impact on the harvest sector (both small-scale and semi-industrial) and will in turn negatively affect export trade and foreign currency income.

Here are 5 of the recommended actions:

(1) Use climate change and risk information to help plan development of our coasts and seas. For example, examine our vulnerability to extreme sea level and storm surges, as well as increased hurricane intensity across the region. Knowing more about changing extreme events, sea level rise and precipitation patterns across the region would help provide credible state-scale information for improving building standards for infrastructure, particularly transport networks (e.g. roads, bridges and drainage).

(5) Work to stabilize our shorelines and preserve natural barriers such as mangroves, salt marshes, and coral reefs.