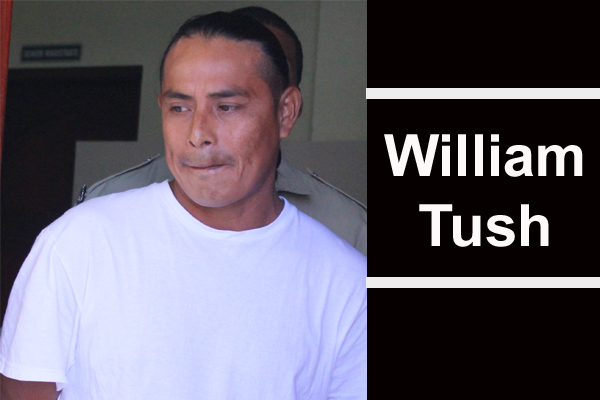 William Tush, 38, pleads guilty to attacking woman, 47, while she exercised on the Northern Highway

Today, William Tush, 38, a resident of #21 Kelly Street, was sentenced to a total of 3 years in prison after he changed his not guilty plea to guilty for the charges of aggravated assault and wounding.

According to police, at 5:20 p.m. on July 22, 2012, Desiree Adolphus, 47, was exercising on the Northern Highway heading south toward Belize City when, as she arrived in front of an abandoned building situated between Gonzalo Quinto & Sons and Matus Brothers, a Hispanic man with long hair grabbed her from behind and put a knife to her neck. He then told her “Let’s go.”

He then dragged her to the side of the abandoned building, but Adolphus started struggling with Tush and she grabbed the knife. As a result of the struggle, Adolphus cut her thumb on the knife, but managed to free herself from Tush, run to the roadside and flag down a vehicle and related her story to the driver.

Moments later, a police mobile unit arrived in the area and Adolphus was able to immediately identify her attacker as Tush.

At the initial arraignment in July of 2012, Tush appeared unrepresented and pleaded not guilty to the charge. But today was set for the trial, and when Tush appeared before Senior Magistrate Sharon Frazer, before Adolphus could be called up to testify, Tush told the court that he wanted to change his plea to guilty.

The Senior Magistrate accepted his guilty plea, but she allowed Adolphus to say something about the matter. When asked what she thought should be done to Tush, Adolphus replied that if that question was posed to her on the day of the incident, she would have told them to lock him up and throw away the key.

She further stated that on that day, her sense of security was taken away from her. And while she is slowly recovering from the trauma she experienced that day, Tush has to suffer the consequences of his actions – a decision she would leave up to the Senior Magistrate.

The Senior Magistrate then informed Tush that although he saved the court’s time in changing his plea, she could not impose a non-custodial sentence, since aggravated assault carries a maximum jail time of three years and wounding, a maximum of five years.

With that said, she then sentenced Tush to one year for aggravated assault, and two years for the wounding charge. Although that’s a total of three years, the sentences will run concurrently, so Tush will only spend two years in prison.