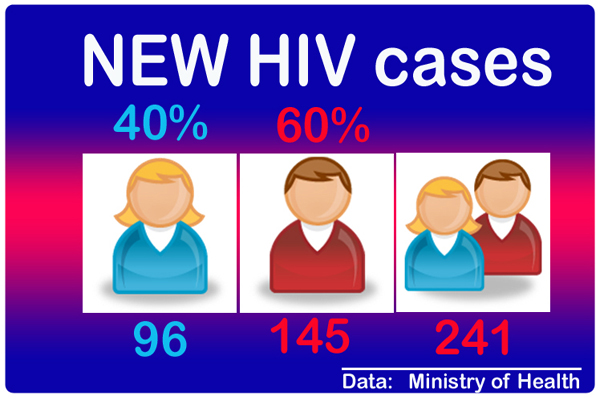 HIV incidences three times as high in men who seek test, than women

Sixty percent of the 241 new HIV cases reported in 2013 were males, according to information Amandala has received from the Ministry of Health. There were also 25 HIV patients who were also diagnosed with tuberculosis (TB) during the same year. In several instances the TB led to the patient’s death.

Specifically, there were 89 HIV-related deaths and 18 deaths due to TB, including 7 HIV patients.

Health statistics indicate that HIV-related deaths rank in the top ten causes of death, along with heart disease, diabetes, and cancer. 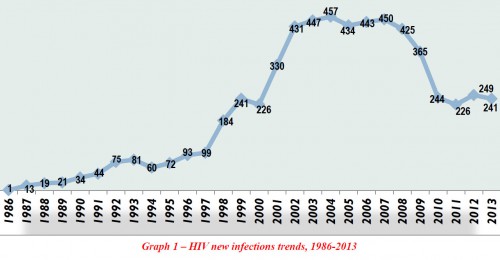 “The male population is also dying more as a result of HIV and unless specific programs are established, tailored towards engaging males earlier in the health system and in the overall national response, it is unlikely that the goals as set out in the National Strategic Plan will be met,” said the Ministry in a report titled, “National TB, HIV/AIDS & other STIs Programme”, published by the Epidemiology Unit.

It added that the Belize and now the Stann Creek districts, where there is a concentration of cases, will warrant specific and urgent interventions.

The Ministry of Health had also previously revealed that the HIV cases are especially concentrated among homosexual males, with a prevalence rate of almost 14%. 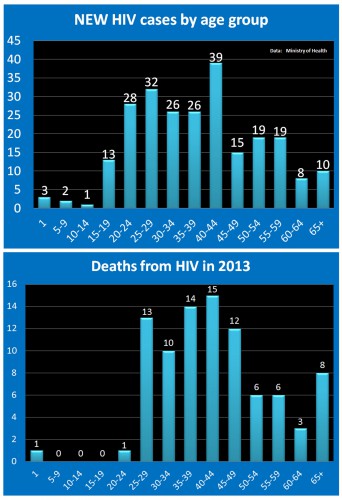 Whereas this 2013 health report did not disaggregate the data according to sexual lifestyle, it did give the gender ratio – with the incidences of HIV positive tests being three times as high in men who test as in women who test, although twice as many tests were conducted among women.

The Health report also noted that among 50 HIV positive mothers who gave birth last year, only 3 passed on the virus to their babies. The others were given treatment to avert the passage of the virus to their children. It noted, though, that the mother-to-child transmission rate of 6.5% falls outside of the target rate 5%. Ninety-two percent of women who were pregnant underwent screening for HIV, the Ministry of Health said.

The Ministry of Health says that HIV cases are down by 3.3% from the 2012 figure, even as there was an 11.5% increase in the total number of HIV tests done in Belize.

HIV complicates the TB situation, which is, in turn, complicated by diabetes – another leading cause of death.

The Ministry of Health advises that, “TB has the potential to increase in two particular populations, the HIV …as a co-infection, although that seems to be on the decline, but the diabetic population can also be increasingly affected.”

The Ministry of Health’s analysis has revealed that “there is poor treatment outcome nationally” because only 40, or 33.1 % of TB patients, were cured by the end of 2013.

The Ministry says that 121 individuals – 74 males and 47 females, including 4 who experienced a relapse – were diagnosed with TB, 117 with pulmonary and 4 extra-pulmonary, with the Belize District accounting for 44 cases, or 36.3% of all cases in the country. A total of 75 patients tested with positive sputum, or were infectious.

The health report revealed that nationally, out of the total STDs diagnosed in the Belize Health Information System (BHIS), 96% of the cases – 4,613 of 4,802 cases – were among females, clearly highlighting the wider amount of males that may be potential carriers of STDs and who are not accessing the health services. Most of the cases were vaginitis, pelvic inflammatory disease, trichomonas, syphilis, herpes and others.