BELIZE CITY, Fri. Feb. 28, 2020– In the aftermath of the deaths of four soldiers from the fledgling BDF Air Wing, which occurred when the Belize Defence Force (BDF) U1-H1 helicopter in which they were traveling crashed in the waters of Western Lagoon, near Gales Point, Manatee, the Ministry of National Security is facing more questions than it can answer. 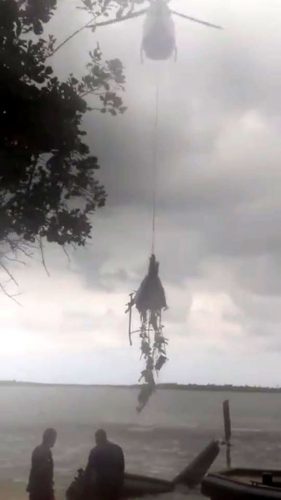 In fact, this helicopter crash is mysterious from several angles.

Adding to the mystery of the downed helicopter, which was said to have been dispatched to provide air assistance during the interception of a drug plane that landed in the area of Gales Point Manatee in the pre-dawn hours of Thursday, is the fact that it apparently went down, without the knowledge of those who had coordinated the interception of a drug jet plane, from which 70 bales, or 2 tons, of cocaine were removed.

It was not discovered that the helicopter was missing until late into Thursday night, when families of the airmen became concerned that their loved ones had not come home, triggering alarm at Price Barracks, the headquarters of the BDF.

By midmorning, news of the missing helicopter began to make the rounds in social media, prompting the Ministry of National Security to hastily call a press conference this afternoon, Friday, at Coast Guard Headquarters.

The Ministry’s press conference, however, appeared to have further enraged the public and the general impression was that the Ministry of National Security was not being forthcoming with the truth about the tragic death of the four soldiers.

Newly appointed Minister of National Security, Hon. Michael Peyrefitte, who was surrounded by the National Security top officials, chaired the press conference, taking a swipe at the media for its early reporting about the missing helicopter. Peyrefitte said he was surprised at some of the reports in the media and described those persons distributing such information as “Facebook whores.”

In describing in general terms the helicopter’s role in the operation, Peyrefitte said, “Normally, when we have the air assistance from the helicopters, it is standard operating procedure for that helicopter to either stay on the ground with the supporting troops, or they would hover over the immediate area to see if they could discover or get any additional clues toward the landing of the plane.

“They would veer coastally if they can, to see if there are any incoming boats or even on land, if they can see any vehicles that were escaping from the area, especially since, in this instance, we did not arrest any persons concerning the plane that landed.”

In his description of the communication protocol the BDF uses, Peyrefitte said, “The only time they would usually radio in is when there is a situation, and so when they did not radio by evening yesterday, there was no need for alarm.”

A reasonable question to ask Peyrefitte is whether a helicopter can continue operating all day with only one tank of fuel.

The Minister continued: “However, when dusk came and night set in, it became of immediate concern to the BDF that the helicopter had not returned to base at Williamson.
“Immediately, the Belize Defence Force kicked in their standard operating procedures for search, and a full-fledged search began last night [Thursday]for the helicopter and the four people on the helicopter — two pilots and two support crew. The search happened, and this morning, the helicopter was discovered in the sea just off Gales Point, and subsequently, a search was done for the four members of the crew.

“The four members of the crew were discovered and their bodies gave no response and they have been determined to be dead.”

Chief Executive Officer in the Ministry of National Security, Felix Enriquez, told the press conference, “Yesterday, we met as a group to discuss the events that had taken place, because we had recently made some changes to the strategic and operational level that we thought to be, and which turned out to be more effective, in our counter-narcotics efforts. But little did we know that amidst the success was this most dreadful tragedy.”

“The pilots are confirmed to be Major Adrian Ramirez, commanding officer of Air-wing; Major Radford Baeza, second in command. The crew members are Corporal Yassir Mendez and Corporal Reynaldo Choco. And as at 14:20 this afternoon, our search and rescue declared the bodies of all four members to have been found. The Ministry of National Security is in communication with the families of the pilots and the crew,” Enriquez said.

The unofficial word out of Price Barracks, however, is that the operation was carried out without the knowledge or input of the BDF Commander, Steven Ortega. The use of the helicopter to provide air assistance in the interception of the drug jet was apparently done outside of the normal protocol of the BDF.

During the question and answer session which followed the ministry’s announcement, it was asked if there was some breakdown in communication between the helicopter and headquarters which could have been a reason for the helicopter not being accounted for, for an entire day, without anyone noticing.

The officials from the Ministry of National Security were asked, “… well, something is amiss here … might the soldiers have gone on a lark or on an unauthorized mission … four soldiers and a very valuable asset [went] unaccounted for, for apparently 24 hours.”

Peyrefitte replied, “I’m not going to embark on any suppositions, and I am not going to disrespect the deceased gentlemen and their families by even getting into a guessing game as to whether or not they were on some frolic of their own. They were on an official mission. You are talking about two of the best pilots not only in the country but in the world. One of them is an instructor who topped his class for the entire Caribbean.

“Now, I understand there may be reckless supposition, but as I clearly indicated before, an alarm was sounded in the evening yesterday when they did not return. The public only knew about it from this morning because that is when the search was leaked.”

BDF Commander Ortega replied: “The helicopters aren’t equipped; however, the pilots do conduct night flying, especially along the coast.”

The Ministry was asked if there was any indication that the helicopter was fired upon.

“I don’t know. We haven’t seen anything. We await the investigation to confirm whatever, because it’s still partially submerged,” General Ortega replied.

“Absolutely no evidence at this point to indicate, that the aircraft was brought down, or shot down or anything to that effect. However, as we said before, there will be a full-fledged investigation that would consider everything. No stone will be left unturned,” said Peyrefitte.

“The Commissioner of Police has already offered to provide a team of officers to assist with the investigation, to ensure that if there was any kind of foul play, then we could investigate that. But to this date, we cannot give you any categorically acceptable answer to indicate what made the helicopter come down,” Peyrefitte added.

“But sir, if you don’t have night vision equipment, aren’t you sending them on a suicide mission?” the Ministry was asked.

“What was the last known point of contact or position with that team? Is that known in this case?” the Ministry was asked.

General Ortega replied, “Yes, the helicopter was over the site during the operation … around 4:30 a.m. or thereabouts.”

“So, you are right, the crash site is under security. It has been cordoned off and being protected so that it is not tampered with. We are yet to assemble the accident investigation team and the rest of the team comprising of the police and the forensics,” Borland said.

“We are also going to have the input of our regional counterparts, the US Southern Command and our friends from the Honduran military, and a key component to this will be the involvement of our own Civil Aviation Department. We intend to give this everything we have, and won’t leave any stone unturned. We want to get to the bottom of exactly what happened, and at the end of the day, the chips will fall where they will, and the truth shall be told,” Borland said.