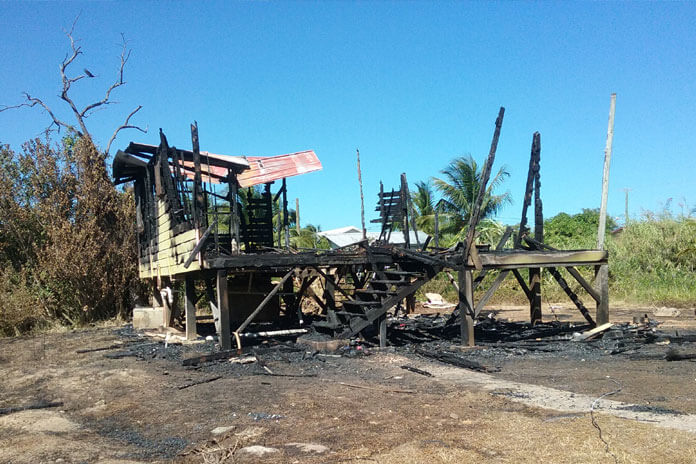 BELIZE CITY, Mon. Feb. 24, 2020– Six persons are now homeless on Raleigh Street, in the Lake Independence area, after their timber house and all their possessions were destroyed by fire at about 5:30 Saturday evening. Luckily, no one was hurt. The grandmother of the family was seen trying to save a bag of possessions, but the bag began to burn and she was forced to leave it, and it was consumed by the fire.

The Belize City Fire Service ultimately put out the fire, and no other structure in the area was damaged.

On our visit to the scene, a neighbor of the family told us that at about 5:30 Saturday evening, she was doing laundry when she saw her neighbor go out, she believed, to the store.

Shortly after, however, she saw smoke coming from the house. The fire spread quickly, and the occupants of the house fled from the home.

Anthony Mortis, Station Manager of the Belize National Fire Service, said today that the cause of the fire was due to two children, ages 2 and 4, playing with matches. He said that the two children were left unattended for a little while when the grandmother went into her room, and the children’s father went downstairs and sat on the steps.

The National Fire Service reminds that matches and lighters are not toys, and should be locked up or kept in an area that is not accessible to children.