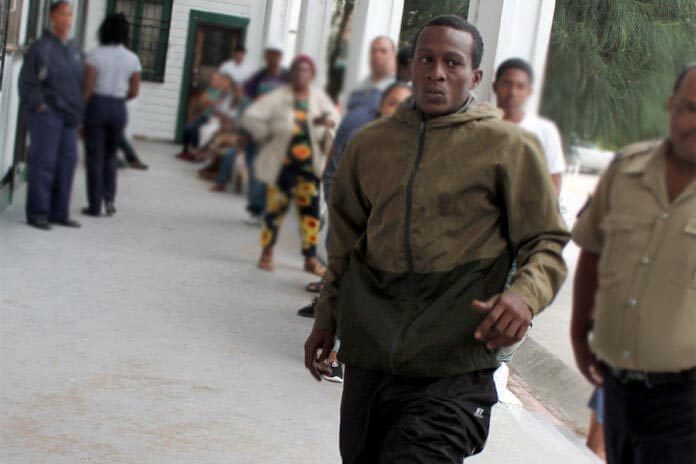 BELIZE CITY, Mon. Jan. 6, 2020– In May 2018, Albert “Cat” Reid, 29, a construction worker of Hattieville, was acquitted of murder. Today Reid, hopping on one leg because of a gunshot injury to his left leg, was back in court facing charges, none of them as serious as murder, but nonetheless a threat to his freedom.

Reid was charged with 6 offences when he appeared before Senior Magistrate Tricia Pitts Anderson. The offences included 2 counts of aggravated assault, 2 counts of threat of death, damage to property and using threatening words. He pleaded guilty to the charges. He was fined $800 for damage to property, $100 for using threatening words, $500 for each count of aggravated assault and $200 for each count of threat of death.

The incident which led to the charges occurred on December 30 at Mile 15, George Price Highway, in Hattieville. Reid and his common-law wife had a dispute which led to Reid using threatening words to his wife’s grandmother whilst he was armed with a machete, and he allegedly used the machete to damage the burglar bars on the window of her house. The police were called to the scene and when two officers, constables Tony Gamboa and Randy Lyons, arrived, they were confronted by Reid, who waved the machete at them in a threatening manner. Reid refused to put down the machete and one of the officers shot him in his leg. Reid put down the machete and he was taken into custody.

He was taken to the Karl Heusner Memorial Hospital, where his leg, fractured by the bullet, was put in a cast.