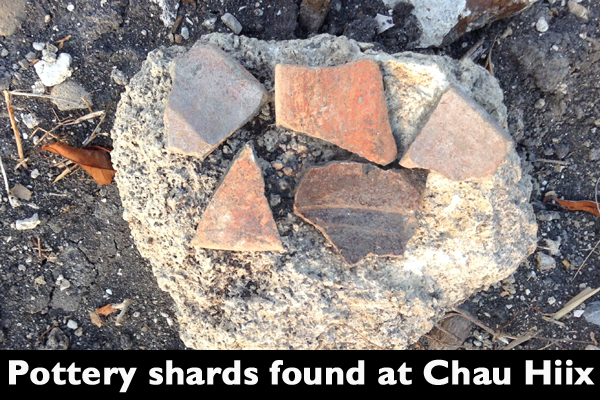 Maya mounds at Chau Hiix already cleared for agriculture; the site has a central pyramid that rises almost 75 feet above the flat lagoon landscape in Crooked Tree

Whereas the destruction of the Noh Mul Archaeological Site has been making international waves, activities at a well-known Maya site in the Belize River Valley area have authorities at the Institute of Archaeology (IA), and their partners at the Belize Audubon Society (BAS) on alert, due to allegations that a businessman from northern Belize, who has not been named, had been eyeing the Chau Hiix site in Crooked Tree Village also, as a source of materials for road works.

BAS had received a report last week, alleging that there had also been some mining for road works at Chaa Hiix, but because the matter is outside their jurisdiction, it was referred to the Institute of Archaeology. Amandala understands that the institute had made an initial assessment on Friday, May 3.

Archaeological Commissioner Dr. Jaime Awe told Amandala that when they visited the site, they observed major land clearings, which were likely done with heavy machinery, for agricultural purposes. Bush had also been burned on the mounds, but the mounds themselves were “structurally intact,” said Awe.

Awe said that the government has never stopped people from farming on Maya mounds. That would be impossible, he said, given the prevalence of mounds across Belize, including the Belize River Valley area.

The report received by our newspaper alleges land clearings on the mound, and pieces of artifacts were said to be found in the area.

Awe told us that they, likewise, observed broken ceramics on the mounds; however, Awe said this is not unusual, and the same sorts of sightings would be expected in places such as Xunantunich.

Archaeologist of the Institute of Archaeology, Josue Ramos, told us that before the destruction of Noh Mul was reported, the institute got an anonymous call saying that there were clearings south of the site, and the community members were concerned that the clearings might extend up to the site.

Ramos said that they were advised that a contractor from northern Belize, who was not named, wants to get materials for road works, and the rangers of the Belize Audubon Society had agreed to help IA monitor the situation. Ramos said that when they visited Chau Hiix, however, they saw no looting.

The Archaeological Commissioner said that they get calls every month from all over, reporting looting and pillaging of archaeological sites; however the hot spots, he said, are really along the Belize-Guatemala border, including places like the Caracol Archaeological Reserve, where Guatemalans who come in to cut xate, for example, would also poach wildlife and loot the sites.

Dr. Awe told Amandala that IA staff plan to make a visit to Chau Hiix again this week to check to see whether there have been any changes since their last visit.

He said that IA understands that development must take place; however, wherever there is a find of archaeological significance, for example, members of the public are advised to contact the Institute at 822-2106 or 822-2227.

“Chau Hiix is located on Western Lagoon, on the border between the Orange Walk and Belize Districts and within the Crooked Tree Wildlife Sanctuary,” Ramos explained.

The site is believed to have been occupied continuously from the pre-classic into the post-classic period (400 BC to 200 AD).

Information published by BAS indicates that, “The Mayas lived in Crooked Tree several thousand years ago, as is evidenced by the Chau Hiix Archaeological Site at the southwestern corner of Western Lagoon.”

It added that the site has a central pyramid that rises almost 75 feet above the flat lagoon landscape.

“It is one of the last known untouched and un-looted Maya sites, because local residents had kept it secret and protected the site for generations,” BAS added.

Research has been conducted at the site since the 1990s, and excavations have yielded beads, containers, blades and ornamental objects.