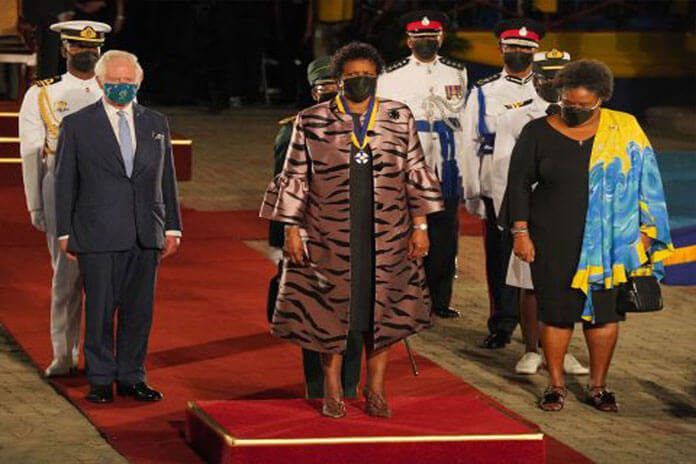 BRIDGETOWN, Barbados, Mon. Nov. 29, 2021 — Barbados this week became the Caribbean’s newest republic, exactly fifty-five years after the nation gained its independence. The festivities to mark the occasion included a twenty-one-gun salute at the stroke of midnight followed by the playing of the Barbadian national anthem.

Several renowned Bajans were present at the ceremony and were honored for their contributions to the island over the years. Among these were entertainer Robyn “Rihanna” Fenty, who was named the country’s 11th National Hero, and His Royal Highness, Prince Charles, who extended well wishes on behalf of his mother, Queen Elizabeth II, who was the Head of State of Barbados prior to the nation’s shift to the republican system of government this week. He stated:

“The creation of this republic marks a new beginning, and it also marks a point of a continuum. A milestone on a long road which you’ve not only traveled but which you have built. From the darkest days of our past and the appalling atrocity of slavery which forever stains our history, the people of this island forged their path with extraordinary fortitude. Emancipation, self-government and independence were your way points. Freedom, justice and self-determination have been your guides. Your long journey has brought you to this moment, not as your destination but as a vantage point from which to survey a new horizon,” he stated during his address. He also noted that the bond between England and Barbados remains strong and that Barbados remains a member of the fifty-four states that comprise the Commonwealth.

Prime minister of Barbados, Mia Mottley, and former governor general of Barbados, Dame Sandra Mason, who was sworn in as Barbados’ first president, were also in attendance. Mason stated during her remarks, “It was from this vision and understanding that we constructed the foundation for our new nation. And with it, the core values and guiding principles of independent Barbados. To this we owe our identity and our triumphs as a people, and as cautioned by our first Prime Minister, the Right Excellent Errol Walton Barrow, ‘we ought no longer to be found loitering on colonial premises.’ In 1966 we were seeking to find ourselves, our national identity and stamp our place in the world. Since independence, our heroes and our humble citizens, our crews and passengers, have built an international reputation anchored on our characteristics, our national values, our stability and our successes. Drawing on the lessons of those convening years, possessing a true sense of who we are and what we are capable of achieving, in the year 2021 we now turn our vessel’s bow toward a new republic. We do this so that we may seize the full substance of our sovereignty”.