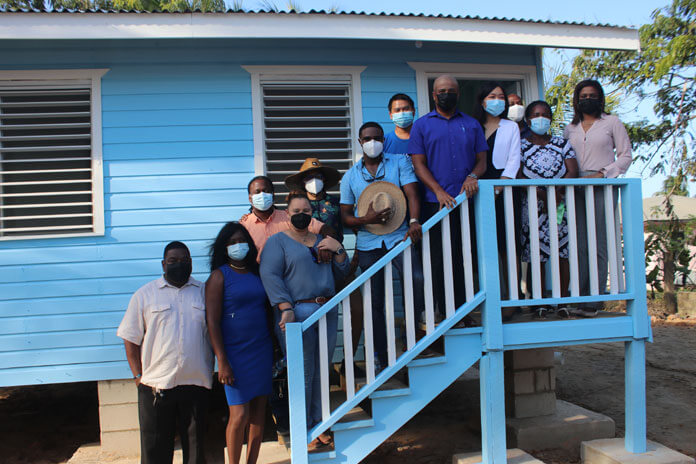 BELIZE CITY, Thur. Feb. 18, 2021– Despite the impending municipal elections slated for March 3, the current Belize City Council is still moving forward with its community outreach projects. On Thursday, Mayor Bernard Wagner along with several sponsors held a handing over ceremony at which Ms. Marlene King of Jones Street became the recipient of a new home.

According to Mayor Wagner, he heard of Ms. King’s plight on the evening news during a segment that aired in November 2020, in which she expressed her despair over her inhumane living conditions. The segment displayed a distraught woman having to sweep water out of her home due to the incessant rains that affected Belize in the latter part of the year. According to Jones, she has had to rely on friends to assist her with food because she and her common-law husband cannot make ends meet. 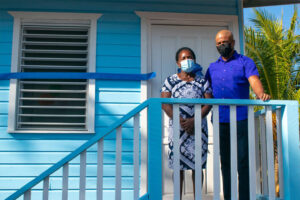 Mayor Wagner then stepped up and contacted donors within the community, namely Nando’s Wholesale, Mikado, Belize Water Services Ltd., Belize Electricity Ltd., Golden City Program, Atlantic Bank Ltd., the Insurance Company of Belize (ICB) and the Embassy of the Republic of China (Taiwan) to garner the resources needed to construct a home for Ms. King. Representatives from a number of these institutions were in attendance to share remarks, including Mr. Duffy Nunez from ICB, Lake Independence community member and councilor-candidate Michael Novelo and First Secretary of the Embassy of Taiwan, Mrs. Gillian Hu.

Through this partnership, Ms. King was relocated to a new dwelling where her rent was being paid for by her sponsors until her new home was erected on Jones Street. The City Council et al. also saw to it that running water and an electrical connection were installed in her new and improved abode.

“It is known that the City Council is not mandated to provide housing. This is something that I believe is not frequently seen in the various municipalities. However, this is what serving the people means. It means collaborating with partners for a collective good, it means focusing resources, however limited, on the needs of others less fortunate, and it certainly means extending a supportive hand when a fellow struggling neighbor cries out for help,” Mayor Wagner stated during his remarks.

After the procedings, Ms. King also shared her sentiments about what this project means for her and her family:

US State Department advises citizens to reconsider travel to Belize

BELIZE CITY, Mon. Feb. 22, 2021-- Due to an increase in violent crimes, including robberies and home invasions, in Belize since the start of...
Read more
- Advertisment -