BELIZE CITY, Tues. Dec. 14, 2021– We had a wonderful Saturday of football this past weekend at the MCC Grounds, where we saw 4 great games played in the Belize District Football Association (BDFA) 1st Division Amateur 2021-22 Opening Tournament.

Game 1 was a very tight match between Stars Academy and Caesar Ridge FC. That game ended in a 1-1 draw, as Leon Jones (17’) gave Stars Academy the first half lead, but Kenroy Linarez (85’) equalized late in second half for Caesar Ridge. 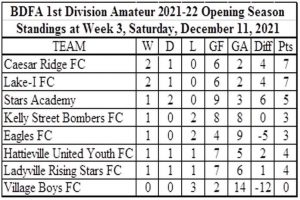 After Week #4 games this coming Saturday, the tournament will take a 2-week break for Christmas and New Year’s.