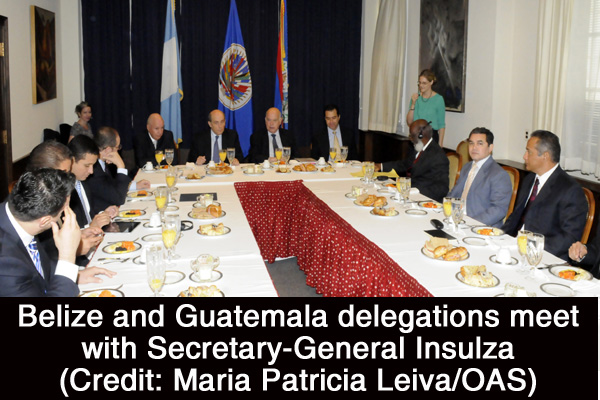 “…the existence of the dispute represented an unsustainable cost for Belize…”

Belize Minister of Foreign Affairs and Attorney General Wilfred Elrington, led a delegation to Washington, USA, for a meeting on Wednesday, May 8, 2013, with his Guatemalan counterpart, Guatemala Foreign Minister Luis Fernando Carrera Castro, and his delegation. The meeting was convened by Secretary General of the Organization of American States (OAS), José Miguel Insulza.

A statement issued today by the Government of Belize said, “The meeting explored various ways of ensuring that the commitment to submit the dispute to the International Court of Justice [ICJ], as contemplated in the Special Agreement, is maintained and acted upon in the shortest possible time.”

A ministerial meeting should follow shortly. We understand that Secretary General Insulza has suggested that the referendum be held in 2014, in light of Guatemala’s stance that it cannot proceed to hold the referendum on October 6, 2013, as initially programmed. Insulza has agreed to convene the next bilateral meeting, to confirm the way forward, by next month, June 2013.

The Government of Belize reports that, “The meeting proceeded in a constructive spirit, with both delegations reiterating the need to seek an early resolution to the age old dispute, despite the present obstacles to the holding of the referenda in October 2013.”

Amandala has been informed that Guatemala continues to take issue with Belize’s Referendum Act, which it contends sets an un-level playing field by requiring 60% voter participation to validate the vote, whereas Guatemala’s vote does not require a minimum threshold of voter participation—only a simple majority, to carry the vote.

The parties have also agreed that the Confidence Building Measures, established in 2005, should be strengthened.

A press release issued by the OAS today said, “Both ministers [of Belize and Guatemala] agreed on the firm will of their countries in maintaining the Special Agreement to submit the Guatemalan claim to the ICJ and, in that sense, they agreed that the Deputy Ministers should meet, within the framework of the High-level Working Group, and as soon as possible, to reinforce the confidence-building measures guiding this process.”

“The parties agreed that the prolongation of the dispute is not conducive to building stronger bilateral ties, nor does it contribute to furthering the regional integration process,” the GOB statement added.

Belize underscored that “the existence of the dispute represented an unsustainable cost for Belize, from the environmental, economic and security perspectives.”