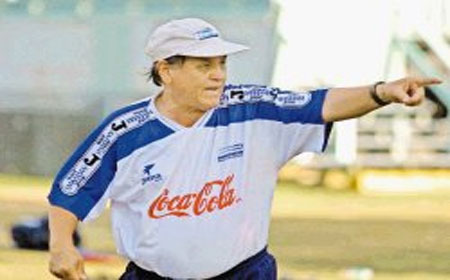 BELIZE CITY, Thurs. Aug. 27, 2015–Reports received at our sports desk are that former Belize national team coach, Honduran Jose de la Paz Herrera, better known as “Chelato Ucles,” was today flown out of Honduras to Costa Rica for medical treatment.  He has been suffering from diabetes and had been hospitalized in Honduras to undergo a foot operation.  From the sports desk, and on behalf of his many friends in Belize, we send our best wishes and prayers for a successful recovery to Chelato.

Following his 2010 stint as national team coach for Belize “in a bid to qualify for Brazil 2014,” Chelato had reportedly been helpful to Belizean players attempting to secure places with teams in the Honduran league.

Aside from coaching various clubs to championships in the Honduran top league, in 1981 he became the first national coach to carry Honduras successfully through the qualifiers to the World Cup, where they performed well in World Cup 1982 in Spain.