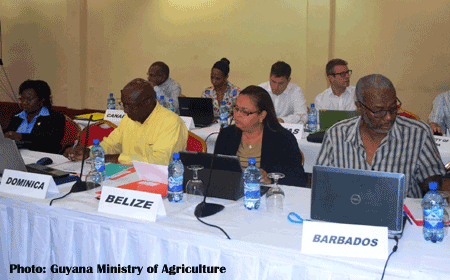 Speaking at the opening ceremony for the forum, Hon. Noel Holder, Guyana’s Minister of Agriculture, said in his formal address that, “The Fisheries sector plays an important, direct role in national food security. It is well-known that fish has a highly desirable nutrient profile and provides an excellent source of quality animal protein. Globally fish contributes some 16 percent of the total animal protein intake.”

Holder added that, “In the Caribbean, the fisheries and aquaculture sector is a major economic contributor to domestic markets, almost US$420 million in 2014. It is also a significant employer with about 116,000 persons directly employed and over 225,000 indirectly employed.”

He also expressed support for the implementation of the Caribbean Community Common Fisheries Policy (CCCFP), which has been authorized for implementation.

“This policy, I believe, is aimed at fostering greater harmonization across the Caribbean in the sustainable management and development of the region’s fisheries and aquaculture resources, with special emphasis on promoting the most efficient use of shared resources, while aiming to improve food security and reducing poverty in the region,” the Minister elaborated.

He underscored the need for Caribbean countries to ensure small producers are not excluded from rapidly growing export markets.

“We need to find cost effective ways to produce (to reduce cost of production) and to facilitate affordable certification of food safety and environmentally sound production,” he appealed.

Holder said that, “This Fourteenth Meeting [of the Caribbean Fisheries Forum] provides an excellent opportunity to address and deliver these recommendations and decisions to the Ministerial Council.” That Council, the chief policy-making body on fisheries in the Caribbean region, is due to meet next month.

According to a statement from the CRFM, the Caribbean Fisheries Forum brought together more than 50 participants, including directors of fisheries, chief fisheries officers, and other development partners, such as NGOs and international organizations like the UN Food and Agriculture Organization, which work with the CRFM in promoting the development, management and conservation of the Caribbean’s fisheries resources.

“We’re discussing a lot of emerging issues in the region. We are looking at how to improve conservation and management of key species, apply and use the value chain approach in order to increase benefits, such as increased income and export potential. We are discussing sanitary and phytosanitary capacity as a part of our overall strategy to strengthen our trade capacity, so that we can indeed export more to key international markets and also to provide greater quality and safety in terms of the fish and seafood that we provide for our people as well as our guests and tourists coming into the region,” said CRFM Executive Director, Milton Haughton, who highlighted the most pressing issues on the Forum’s agenda.
Haughton pointed to the CRFM’s initiative to strengthen the linkage between fisheries and tourism within its 17 Member States. He said that, “the tourism sector is a huge sector and we believe we have a golden opportunity to enhance the linkages between fisheries and tourism to derive more benefits—more income, more employment opportunities—for our fishers and their communities.”

In its deliberations on aquaculture, the Forum discussed and endorsed a new 5-year aquaculture action plan, under which CRFM Member States would be supported in their pursuit of non-conventional aquaculture.

Haughton noted that, “Aquaponics is something that has been growing in the region—this is growing fish and vegetables together in a limited area using re-circulating water systems. This is more suitable for the smaller islands, like Antigua and Barbuda, and Barbados.” Aquaponics is also being pursued here in Belize.

Before its conclusion on Friday, the Forum discussed a proposal from the United States to support fishers through a risk insurance facility, Caribbean Catastrophic Risk Insurance Facility (CCRIF). The CRFM notes that under this regime, CRFM Member States will make contributions to the scheme in addition to the initial contribution of the USA.

The meeting also received a report from Belize on the roll-out of its managed access program, under which fishers are now being licensed to fish in specific fishing grounds which they have traditionally exploited, as a part of a rights-based regime which will, as of June 2016, formally put an end to open access fisheries and hopefully curb illegal fishing in Belizean waters. The Fisheries Department has been undertaking a soft roll-out since this January.

Belize was appointed to serve on the CRFM’s Executive Committee of the Caribbean Fisheries Forum for the period April 2016 to March 2017. That Committee is an advisory arm of the CRFM, comprised of 6 Member States.