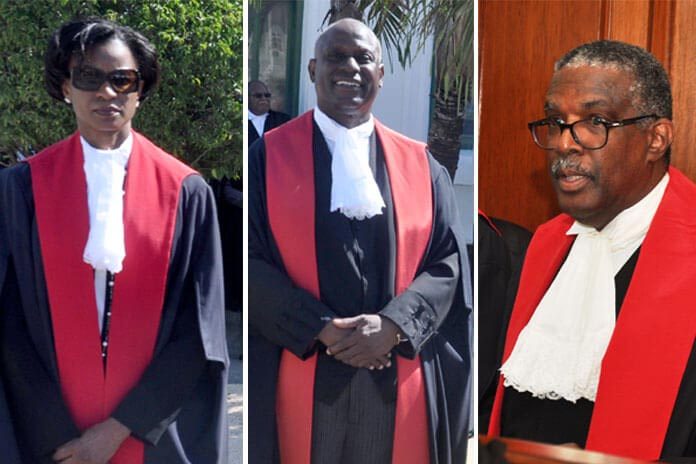 BELIZE CITY, Thurs. Jan. 9, 2020– This year, at least 3 Supreme Court justices are scheduled to demit office, and this will create a serious shortage of judges for the court, unless they are replaced in a timely fashion.

Chief Justice Kenneth Benjamin and Justice Courtenay Abel will reach the mandatory retirement age of 65 later on this year. Additionally, Justice Shona Griffith is leaving the Belize bench to take up an appointment at the Supreme Court of Barbados.

Both Justice Griffith and Justice Abel are from the Civil Division of the Supreme Court. The court is still struggling in its Criminal Division to catch up in its processing of a backlog of cases, mostly murder cases. With about 200 persons on remand for murder, a number of accused murderers have been released on bail, because they have been behind bars too long without being tried in accordance with the stipulation of Belize’s Constitution, which states that accused persons must be tried within a reasonable time.

According to Attorney General Michael Peyrefitte, who met with Chief Justice Benjamin recently, Prime Minister Dean Barrow will meet with CJ Benjamin to chart the way forward for the Judiciary.

In an interview this week, Attorney General Peyrefitte explained that, “Very soon it will be five [judges]. Later on, I think it’s this year or early next year, we have two more justices who will reach the age of sixty-five and we will have to know at that point what we intend to do with those judges.”

Peyrefitte went on to explain, “I had a preliminary meeting with the Chief Justice yesterday, and he has informed me that notices have been sent out throughout the Caribbean and locally as well, and more will be done locally to try to seek judges to have an interest in coming to this jurisdiction to practice.”

Peyrefitte added that his meeting with the CJ “was just a preliminary meeting to map out the challenges that we have, and very soon, there will be a meeting between the Chief Justice and the Prime Minister and possibly myself again, to discuss where we go forward from here.”

Peyrefitte explained that there is always the option to extend, even for a short time, the term of the justices who are up for retirement presently — “but then these judges would have to want to stay,” he noted.

“We would have to go through a process and seek consultation as to whether or not there would be consensus for them staying. It’s a process and it’s delicate. The Executive has to be a part of this selection process and dealing with this matter, while at the same time, not even appearing to be interfering in the Judiciary.

“So we’re walking a very, very delicate line, and I would be uncomfortable saying more than what I have just said, other than to say that there will be a meeting very urgently between the Chief Justice and the Prime Minister because there are other issues as well,” AG Peyrefitte said.