Belizean youths in the National Assembly 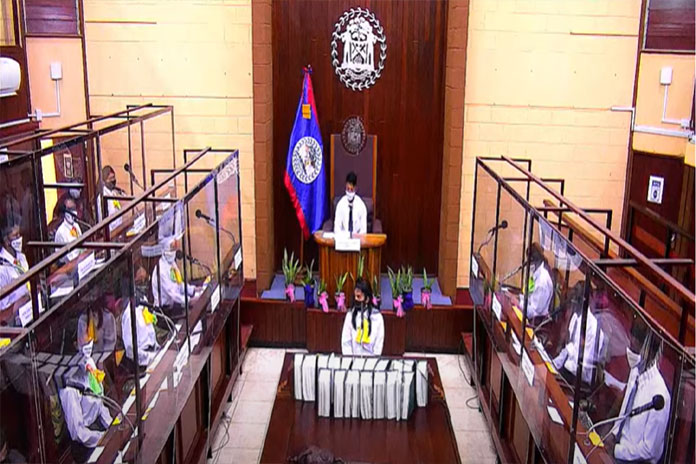 BELMOPAN, Sat. Nov. 20, 2021 — Last Saturday marked the celebration of World Children’s Day, which promotes the improvement of children’s lives and welfare on an international scale. This year’s children’s day was commemorated under the theme: “A better future for every child” and while Belize has been reeling from a record-high year of violent crimes affecting minors, on Saturday the gears were positively shifted as viewers tuned in to the sitting of the Children’s Parliament at the National Assembly in Belmopan.

The Children’s Parliament is an annual initiative which features mock debates at the House of Representatives and the Senate in an effort to prepare Belizean children to become active decision-makers in their society. During the proceedings, a number of Belizean youths from across the country debated a “bill for an act to make it an offense for any person to recruit or groom children in the commission of an offense”.

The Sitting of the House was presided over by Alexander Munoz, who acted as the Speaker for the day, and saw contributions made by each youth-representative, who spoke on behalf of all children from their constituencies and the country at large. During the discussion, both the GOB members in support of the Faux Bill and the Opposition presented their position, backed by statistics and quotations from the Laws of Belize. This could be seen in an excerpt from Aspen Peralta, who was assigned the role of Prime Minister and Minister of Economic Development and Investment.

“Belize, or ‘the jewel’ as we Belizeans so fondly refer to our country, is a land of incredible beauty and abundant natural resources. It is a land of great people with immeasurable potential. But more importantly, it is a land with a limitless future. A future that resides in our most precious resource — our children. However, that future is under threat by persons who seek to use our children to conduct criminal activity for their own personal gain. If we are to protect the future of our country, we can no longer ignore this vile behavior and continue to watch as our children’s freedoms and lives are sacrificed by those that would seek to exploit them. Mr. Speaker, as leaders of this great nation, it is our patriotic duty to put an end to the hideous exploitation of our children,” he said.

Siya Motwani, who acted as the Leader of the Opposition and the Member for Collet, as well as her team members did an equally impressive job at championing the opposition of the bill. She argued, “I look at this bill and I think, ‘what does this bill really solve?’ because the real concern isn’t who, it’s why. Why does it happen in the first place? But additionally, what do we aim to achieve from jailing more people? And what position do kids find themselves in that they can’t say no? My focus today is on one major factor. Have we thought about the amount of violence that our youth is exposed to on a daily? 99% of the Belizean youth have been exposed to violence in comparison to 58% from another Caribbean country, Jamaica, according to Galen Mortis in 2010. Youth exposure to violence will be an important risk factor for future perpetrations of violence.”

The other Belizean youths who participated in the mock debate also had prepared well-written and researched arguments and were each given the opportunity to present during the special sitting of the Senate which followed. Notably, several youth representatives had the opportunity to meet with the respective parliamentarians whom they shadowed based on their assigned posts. They also engaged in various preparatory sessions to be able to fully engage in Saturday’s event.