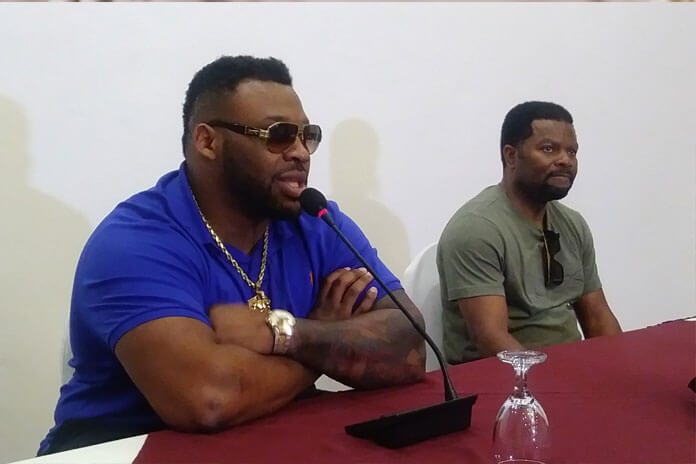 BELIZE CITY, Thurs. Jan. 2, 2020– Heavyweight boxing contender, Belizean Jarrel “Big Baby” Miller, came to Belize from the United States where he resides to tell Belizeans not to lose hope in him because he has rebounded after his fall from grace and he is aiming to take the title later this year. Miller, a top ten heavyweight who has never been beaten, hopes to fight in Las Vegas in February, a fight he needs to help him commence his climb back into contention for the biggest prize in boxing.

Last June, prior to his heavyweight fight against WBA/WBO/IBF champion, Anthony Joshua, Miller failed a drug test and faced sanctions. He said that since that time he lost his ranking, but after winning his upcoming fight he will be back in position to fight the heavyweight champion. Miller, who spoke to the press at the Best Western Belize Biltmore Plaza Hotel this afternoon, said he has 23 wins and no losses, with 20 of his 23 wins being knockouts. He said that he loves to knock out his opponents.

He told the media that he regrets his error but he has learned from his mistake and is eager to get back into the ring to prove himself. Miller said Belizeans should rally behind him, that he will represent them to the max and that he won’t let them down again. He said he looks forward to performing in exhibition fights in the Belize City Civic Center and to conducting a training camp in Belize to encourage youths to become involved in boxing.

Miller’s manager, James Prince, said that when Miller becomes the heavyweight champion it is unlikely that he will fight professionally in Belize because there is no venue in the nation that has a seating capacity for about 40,000 people.

Miller said he will be spending a little time in Belize during which he will enjoy his favorite Belizean dishes. He said he feels strong and that in his younger days Mike Tyson was his favorite fighter.