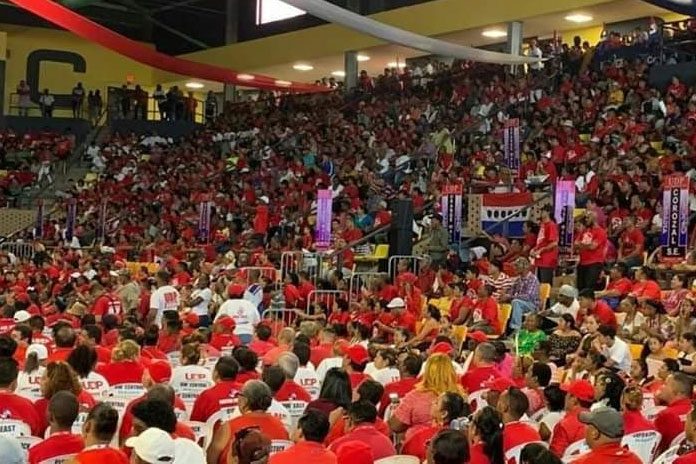 BELIZE CITY, Sun. Feb. 9, 2020– The United Democratic Party (UDP) filled the Belize City Civic Center with its history-making national convention to elect a new leader and executive — an event from which the media was completely banned.

The media was barred from entering the convention grounds (inside the Belize Civic Center) until the official convention business was finished. The UDP, however, allowed observers from the United States Embassy inside.

When the results of the delegates’ voting were announced this afternoon, it became clear that Hon. Patrick Faber (Collet) and his team were demolished by Hon. John Saldivar (Belmopan) and his team, which won the day handily.

The UDP’s new executive was sworn in by the party’s new chairman, Senator and Attorney General Michael Peyrefitte, who ascended to the chairmanship of the party unchallenged after two other aspirants dropped out of the race.

The Second Deputy Leader race between Hon. Beverly Williams (Belize Rural Central) and Hon. Manuel Heredia (Belize Rural South) was won by Williams, who was supported by 349 delegates to Heredia’s 216.

In the Vice Chairman race between outgoing chairman of the party, Alberto August, and Belmopan mayor Khalid Belisle, August took the post with 344 votes to Belisle’s 220 votes.
It should be noted that Mayor Belisle is the only aspirant from Team Saldivar to have been defeated.

Saldivar takes over the leadership of his party even as storm clouds hang over his head because of his relationship with an accused fraudster, Lev Dermen, who is on trial in a US federal court in Salt Lake City, Utah.

Last Wednesday, Dermen’s former business associate, Jacob Kingston, began his testimony at the trial. Kingston, who, along with three members of his family, has pleaded guilty to fraud, money laundering and obstruction of justice, is expected to lead prosecutors through the maze of business transactions that he and Dermen conducted.

Some of the US$511 million that the Kingstons and Dermen defrauded the U.S. Internal Revenue Service out of was spent in Belize and Turkey. That is what prosecutors in the case are probing, and Kingston is expected to testify about the existence of text messages between himself and John Saldivar.

Kingston is also expected to decode those text messages that were exchanged between himself and John Saldivar.

In addition, Kingston will most likely reveal which Cabinet minister he was directed by Dermen to pay US $25,000 per month. It has not been revealed from the court documents that were made public, how long the period was during which the “government official” was being paid the $25,000 per month.

With Saldivar having been elected as Party Leader, PM Barrow is in a tricky spot. The retiring Prime Minister had pledged to act “swiftly” on evidence against any of his Cabinet ministers in the Lev Dermen matter, but how can he discipline the leader of his party if the allegation against him, that he was bribed by Lev Dermen, surfaces irrefutably in the Salt Lake City trial?

We put that question to the newly-elected UDP vice chairman, Alberto August, on Monday morning, along with the question of a timeline for Saldivar taking over the reins of government prior to the next general election.

August told us that if PM Barrow decides to go into retirement early, then Saldivar will be called in by the Governor General and he will be sworn in as prime minister of the country.
We asked August whether Barrow could discipline the new UDP leader, if the need arose.
August said that, in accordance with the constitution of the party, our Prime Minister is still the leader of the party in the interim period, until he resigns.

The new leader is Leader Elect of the party, he said.

August added, “Whatever happens in Utah has no bearing on our party; we are an organized mass political party. Just like how everyone was saying John Saldivar this and John Saldivar that, and when the evidence came out, it implicated Ralph Fonseca and Said Musa.”

We cautioned August, telling him that all the evidence is not yet out from the witness in the case.

“That is a separate matter; we are running the affairs of the United Democratic Party, and the statement of a man is not evidence. A drowning man can say anything weh e wan seh,” August told us.