A billion dollars in taxes! 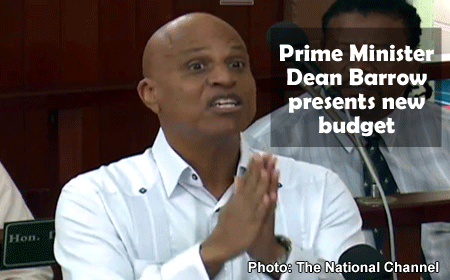 From “An economy imperiled” to “Bouncing back – a bold Belizean recovery!”

BELMOPAN, Cayo District, Mon. Mar. 13, 2017–An $80 million menu of tax measures was formally unveiled in the National Assembly this morning by Prime Minister and Minister of Finance Dean Barrow, delivering his 10th national budget presentation since his party came to power in 2008 under the theme, “Bouncing back – a bold Belizean recovery!”

Just last month, Ministry of Finance officials in a presentation to social partners—the private sector and unions—delivered a starkly contrasting presentation under the same caption it had pitched to bondholders, signaling that the Belize economy is “imperiled.” The officials had outlined Government’s planned “fiscal consolidation measures,” but the details of tax measures were not unveiled until today.

Whereas Barrow’s budget speech forecasts an economic turnaround to coincide with the new budget year, spanning April 1, 2017 to March 31, 2018, it calls for an unprecedented BZ$1.033 billion in tax revenues, up from the BZ$937 million approved by parliamentarians last year, when the budget was propped up by a $50 million tax hike at the pumps. Further levies on fuel are included in the new mix of tax measures.

Last week, Barrow said that the tax measures would yield roughly $70 million in revenues and $30 million in cuts.

“Even with fiscal challenges we face, there are certain commitments that we will not retreat from…” said Barrow. He added that the Government will implement a third and final stage of a salary adjustment package for the public officers and teachers, deferred last year following Hurricane Earl. He said that the 3% adjustment will require an additional $15 million in resources.

As we previewed last week, the Government has been looking at sin taxes to prop up its new budget. It has also accepted a recommendation from the private sector, which also suggested a revisiting of the fees charged to tourists visiting Belize.

Today Barrow, in explaining the proposals outlined in the General Revenue Appropriation (2017/2018) Bill, 2017, confirmed reports from the Opposition People’s United Party (PUP) that the Government will also require specified statutory bodies—such as the Belize Tourism Board, the National Institute of Culture and History, the Belize Airports Authority and the Public Utilities Commission—to transfer 10% of their receipts to the Government’s Consolidated Revenue Fund. 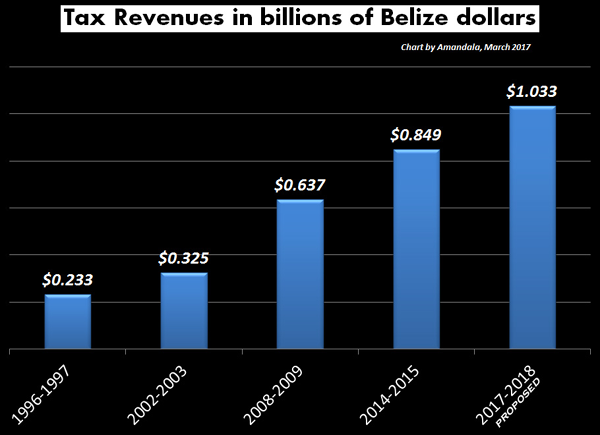 He also pointed to a freeze in public expenditure on goods and services, with belt-tightening to continue at least to the end of the UDP’s current term of office.

In detailing the tax measures today, Barrow said that, “…the very first revenue measure to be adopted in the new financial year will be this: all statutory boards are hereafter required to contribute 10 percent of their 2017/18 income to the Consolidated Fund.”

Barrow today announced that this year’s budget will have a financing gap of $261.5 million—a gap he proposes to meet with $41.5 million in disbursements for loans already contracted with multi-lateral development partners to fund Capital III Expenditures; $20 million in budget support from the Republic of China (Taiwan) under the on-going bilateral economic cooperation program; a $20 million draw-down of PetroCaribe financing; $125 million in domestic financing through the issuance of more treasury notes and bonds, as well as $55 million from the sale of Government-held shares in Belize Electricity Ltd. and Belize Telemedia Ltd.

The House today approved a motion for the sale of 3 million Government shares in Belize Electricity Limited at $5 each to the Belize Social Security Board.

Opposition Leader Johnny Briceño strenuously objected, saying that the Government is using the Social Security Board as their piggy bank to prop up their budget—a budget in serious trouble, he added.

These monies that are going to be used from Social Security are supposed to be available in the future whenever all of us get sick or when we are retiring, said Briceño.

However, Barrow defended the move saying, “This is an investment in which SSB can’t miss… This is a sure-fire investment that will help SSB in terms of the flows… to be able to increase benefits… without having to raise contributions.”

In just a few months, another $180 million is due to be paid to the Ashcroft group as a consequence of the Government’s nationalization of the company. The domestic borrowing detailed above would be largely to settle this tab with the Ashcroft group.

Today, the House also approved the Fiscal Policy, Budget Proposals and Fiscal Strategy Statement and Reports Motion, 2017, which enshrines the fiscal consolidation measures apparently intended to signal to bondholders Belize’s formal commitment to implement measures which will reduce the need for future renegotiation of the superbond.

Of note is that amid the renegotiation of the superbond, the national debt is reported at 92% of GDP, or in excess of $3 billion, based on Barrow’s pronouncements today:

The exponential growth in tax revenues coincides with mounting public sector debt. Previously published official accounts indicate that at the end of December 2008, the Central Government’s debt and guaranteed debt stood at $2.2 billion or 78% of GDP, down by $76.2 million from the 2007 position. This included $1.8 billion (or 64.4% of GDP) in external debt, and $332.8 million or 11.8% of GDP in domestic debt, and $48.9 million or 1.7% of GDP in guaranteed debt.

These official accounts demonstrate that the domestic debt has since swelled to unprecedented levels, largely on account of the local borrowing to pay compensation to the former shareholders of BTL. Today, Barrow insisted that the investment will more than pay for itself in the years ahead.