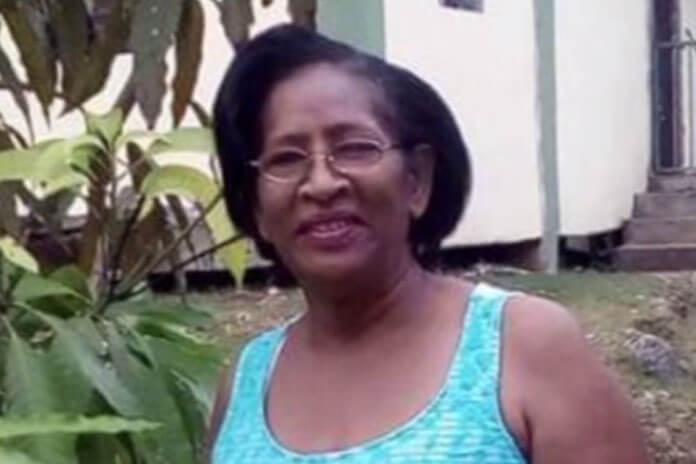 BELIZE CITY, Tues. Mar. 10, 2020– Around 7:00 a.m. today, a passerby on a dirt road in the Lake Gardens area of Ladyville came upon a gruesome sight — the body of a middle-aged woman who was semi-nude, near an illegal dump site. Her body was discovered lying face-down with what appeared to be a cut wound to her upper body.

The passerby called police and the work of identifying the woman got underway in earnest.

Later during the morning, the woman was identified as Carolyn Joan Arnold, 63, a resident of Lake Gardens, located on the opposite side of the Philip Goldson Highway, near Mile 9, across from the Lords Bank junction.

The head of the Belize City Crimes Investigation Branch, Superintendent Alejandro Cowo, told reporters that after receiving information of a female body on a road in the Lake Garden area near the M&M construction site, police visited the scene and observed the motionless body of a woman on the street side with an apparent injury to the upper body.

Lake Garden resident, Evangelina Jimenez, told News5 that around 12:00 a.m., she heard the dogs in the area barking, but when she peeped through her window, she did not see anything, so she went back to bed.

“Then, I hear the car gone more down ahead, and then I hear it back of my house, on the next road dah back. I hear di dogs di bark again. And I hear them open the door again from the car. And then I start to think a lotta thing, and I say maybe something di happen outside. I can’t hear if somebody di scream or nothing, cause the dogs di bark.”

Arnold’s cellular phone, jewelry and other personal belongings were found on the scene, so police have ruled out robbery as a motive for her murder.

Police confirmed that they will do tests to determine whether Arnold was sexually assaulted.

Cowo was asked if he thinks that this was a crime of opportunity.

“We are not sure, as her belongings were found with her. At the scene, the police found a cell phone, a gold chain, and her eyeglasses,” Cowo told reporters.

Information is scarce, but Cowo said police are interviewing family members of Arnold.

Arnold lived alone and reports are that sometime on Monday night, she went to visit a friend.

Police have not yet made an arrest, and there are no suspects at this time.