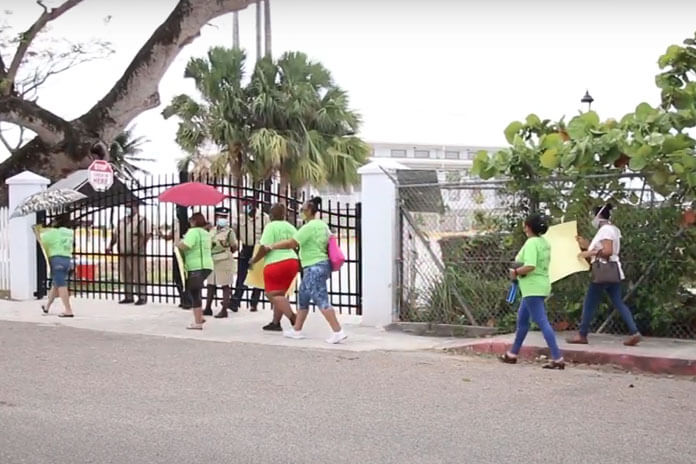 BELIZE CITY, Tues. Apr. 27, 2021– The BNTU, on the second day of its strike action against the Government of Belize, carried out an education campaign at Battlefield Park in downtown Belize City. The teachers are making members of the public more aware of the reasoning behind their acts of resistance against the proposed salary cuts, amid what they call a Government smear campaign that is being carried out through the airing of advertisements on social media and on some local television/radio stations.

The teachers are reiterating that the purpose of their acts of protest against the Briceño administration is to ensure the implementation of the UNCAC through the passing of good governance legislation and to express their outright rejection of the Government’s 10% salary cuts.

After their morning education campaign, teachers marched from the Battlefield Park towards the House of Culture, to picket the Cabinet Meeting which was in progress.

In reference to a possible deduction that might be made to teachers’ salaries due to their current absence from the classroom, the president of the BNTU Belize District branch told local media that they are well aware of the repercussions of their decision to take a stand and are prepared to continue to stand with their union.

According to the national president of the BNTU, Elena Smith, the classroom sit-out by teachers will continue until the Government returns to the negotiation table. Members of BNTU branches across the country are now participating in the strike action. Today, Tuesday, teachers in San Pedro protested on the island. Reports are that they have not delivered the usual virtual learning packages to students since the start of the week.

During the meeting of Cabinet today, Minister Henry Charles Usher updated the government on the situation and informed Cabinet that he had written to the unions on April 22, relaying the position of the Government.

Diane Maheia, CEO of the Ministry of Education, told News5 that the strike action is unfortunate and that the persons who will be most impacted are the students, the majority of whom have been out of the classroom for over a year.