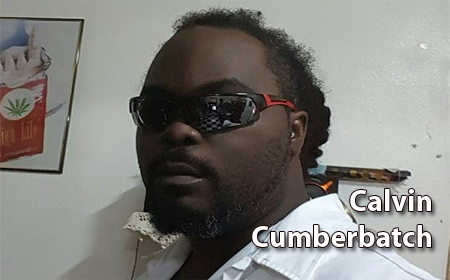 BELIZE CITY, Tues. Jan. 19, 2016–There was a serious road traffic accident on the Philip Goldson Highway over the New Year’s weekend that left two persons dead and one man injured. The injured man, Calvin Cumberbatch, Sr., who is an employee of the Belize City Council Traffic Department, was booked on six charges and arraigned in the Magistrate’s Court this afternoon.

Mendoza arraigned him on six indictable charges in connection with the January 3 fatal accident in which Cumberbatch lost his wife, Pamela Garnett-Cumberbatch, the popular money lender from Caesar Ridge Road, in the Yarborough area.

Ladyville police charged Cumberbatch with two counts of manslaughter by negligence for allegedly causing the death of his wife, Pamela, and for the death of Burrell Boom resident Alfredo Navarette.

In addition, Cumberbatch was also charged with two counts of causing death by carless conduct; one count of driving a motor vehicle without due care and attention and one count of failure to keep as close as possible on the right hand side of the road.

Magistrate Mendoza explained to Cumberbatch that no plea would be taken from him, because the charges are indictable.

There was no objection to bail from the court prosecutor and Mendoza offered Cumberbatch bail of $5,000 plus one surety in the same amount.

Cumberbatch’s case was adjourned to April 18 when, under the new criminal procedure rules at the court, he will be provided with disclosure of the evidence against him.

On the morning of Sunday, January 3, Cumberbatch was driving a white Toyota Tundra pickup truck; his wife Pamela was in the passenger seat and the couple reportedly was heading to Sandhill, when a collision occurred between Miles 5 and 6.

Cumberbatch’s pickup and a grey Dodge Caravan which was being driven by Alfredo Navarrete, an 80-year-old resident of Burrell Boom who was heading toward Belize City, collided head-on. The impact of the collision turned both vehicles into mangled metal, and Pamela Cumberbatch and Alfredo Navarrete died upon impact.

After the arraignment, Matura-Shepherd told reporters, “We were shocked to hear that he [Cumberbatch] would be brought to court. We learned from the news yesterday that he was charged. That is not true.”

Matura-Shepherd said, “Mr. Cumberbatch is still ill and will go back for another surgery.”

Matura-Shepherd added, “The file would have been taken to the DPP. The police know they don’t have any witnesses. But when the disclosure comes, we will see what they have. In some instances like this where you still don’t have everything, you would take it to a coroner’s inquest.”

“Mr. Cumberbatch was served with a notice of intended prosecution and the police have up to 90 days to charge. Usually, you wait for someone to recover,” Matura-Shepherd said.

In June 2015, tragedy struck the Pamela Garnett-Cumberbatch family when her son, Mark Gentle, was shot and died a few days after being hospitalized.