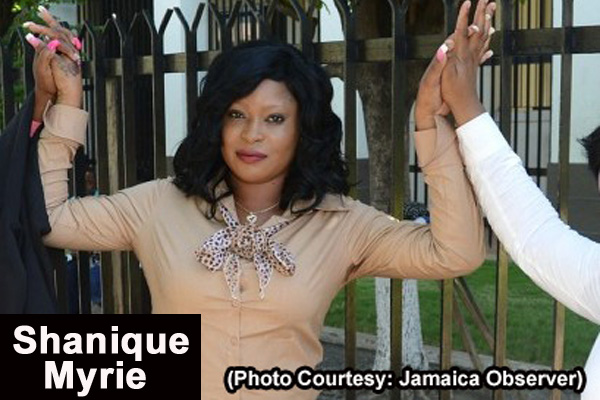 “…the scope of the concept of ‘undesirable persons’ is subject to control by the major Community organs… Refusal [of entry] on the basis of undesirability must be based on national law and on Community law but where the former is inconsistent with Community law, the latter must prevail.”

The Caribbean Court of Justice (CCJ) on Friday awarded Jamaica national, Shanique Myrie, pecuniary damages of BB $2240 (Barbados currency, equivalent to BZ$) and non-pecuniary damages to the tune of BB$75,000 (3.9 mil Jamaica dollars), in addition to legal costs, after declaring that Barbados had breached Myrie’s “right of entry without harassment or the imposition of impediments” in a landmark case which Myrie had lodged against Barbados after she was denied entry, detained and deported back on March 2011.

“She claimed that she was made to undergo a painful and humiliating body cavity search by a Barbadian border official, that her detention cell was unsanitary, and that this and other treatment to which she was subjected, amounted to a serious breach of a right of free movement, and also a violation of her fundamental human rights and freedoms,” CCJ president, Dennis Byron, recounted, in reading the executive summary of the CCJ decision.

Myrie, 22 at the time, filed a challenge in 2012 with the Caribbean Court of Justice, claiming that she was mistreated at Grantley Adams International Airport, merely because of her nationality; however, the CCJ did not find that such discrimination was proved. The CCJ found, though, that Myrie’s expulsion was “unlawful.”

“This necessarily included her subjection to the body cavity search and being detained overnight in a cell in deplorable conditions. The Court held that this treatment constituted a very serious breach of Ms. Myrie’s right to entry and so she was entitled to be awarded damages, though not exemplary damages,” the CCJ ruling said.

Myrie claimed entitlement to a right of free movement in CARICOM (the Caribbean Community), specifically the right of free entry without a right of harassment, under Article 5 of the Revised Treaty of Chaguaramas (RTC).

Barbados had denied Myrie’s allegation of the improper cavity search, and it also denied that her cell was unsanitary. Barbados also maintained that Myrie was not refused entry for the sole reason that she was a Jamaican national; but contended that she was rightfully deported because she was untruthful about the identity of her Bajan host.

Barbados contended that the 2007 CARICOM Heads of Government Conference Decision, which was referenced in Myrie’s claim, did not create for her any legally-binding right to enter Barbados – but even if it did, it did not create an absolute one and could not be judicially reviewed.

The ruling went on to say that, “The 2007 Conference Decision was another step in furthering the fundamental goal and clarifying the right of free movement as it made clear that every Community national is entitled to a ‘definite entry’ of six months upon arrival in another member state.”

The court added that, “both the rights of establishment and of the provision of services, including services in the tourism sector, presume of necessity the right of movement of Community nationals without being obstructed by unreasonable restrictions. An essential element of the right of free movement is entry and stay of a Community national in another member state hassle free, that is to say, without harassment or the imposition of impediments.”

In the event that a country denies entry “on a legitimate ground” to a CARICOM national, the CCJ said, that person should be given the opportunity to consult or contact an attorney, a consular official of his or her country, or a family member.

Of note is that the court has signaled the precedence of what it terms “Community law:” It said that it expects Barbados to interpret and apply its domestic laws liberally so as to harmonize them with Community law or, if this is not possible, to alter its laws.

The CCJ said that Barbados did not present enough proof to deem Myrie an “undesirable” visitor.

“The concept of undesirability must be concerned with the protection of public morals, the maintenance of public order and safety and the protection of life and health. While member states have some discretion when invoking this exception, the scope of the concept of ‘undesirable persons’ is subject to control by the major Community organs, particularly the Conference, and ultimately by the Court as the Guardian of the RTC. Refusal on the basis of undesirability must be based on national law and on Community law but where the former is inconsistent with Community law, the latter must prevail,” the CCJ said.

Myrie’s application was supported by the Government of Jamaica. Jamaica Minister of Foreign Affairs and Foreign Trade Hon. A.J. Nicholson said in a statement today that the CCJ case is of “huge significance,” not only to Jamaica but to all other CARICOM member states.

Nicholson said that the CCJ made it clear that CARICOM member states which refuse entry to other CARICOM nationals must give promptly and in writing, reasons for refusing entry to the community national; therefore, it is a far-reaching judgment.

He also said that the ruling may impress upon Jamaicans the need to have the CCJ as the country’s final appellate court.

The Myrie case was taken before the CCJ under the original jurisdiction powers, which allows the court to hear cases that have to do with the application and interpretation of the Revised Treaty of Chaguaramas.

Belize is also being challenged under the CCJ’s original jurisdiction powers by Jamaican Maurice Arnold Tomlinson, an LGBT advocate who takes issue with Belize’s Immigration Act, which deems “any prostitute or homosexual or any person who may be living on or receiving or may have been living on or receiving the proceeds of prostitution or homosexual behavior” to be among prohibited migrants.

Tomlinson contends that Belize’s Immigration Act breaches his right to free movement, assured to him under the RTC. Of note, though, is that he has never been denied entry into Belize, although he has reportedly visited the country on multiple occasions.

Tomlinson has a similar CCJ case against Trinidad & Tobago and the court intends to have hearings of his application for leave to commence proceedings next month, on November 12 and 13, 2013.