Home Sports Cheerful for one, and tearful for the next
Sports

Cheerful for one, and tearful for the next 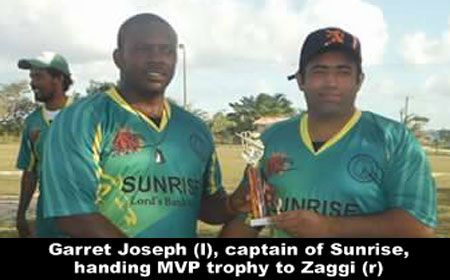 BELIZE CITY, Thurs. June 25, 2015–Under the auspices of the Belize National Cricket Association, the 2015 Harrison Parks Cricket Competition continued over the weekend with some very heart breaking results. Again, my opinions are solely mine. You have any questions, then I’m the one to direct them to.

The first to mention is between Sunrise and Western Eagles at Lords Bank. It was an easy game for Sunrise, who defeated Eagles, 70 to 69, with 6 wickets to spare. In that game, the Eagles batted 69 runs. This is a very small score in any playoff game, if their bowling is not strong. For that inning, Conway Young top scored with 24 runs, and Dirk Sutherland, 14 runs for the Eagles; while Zaggi and Gilbert Seguro took 4 wickets each for Sunrise. After lunch break, the Eagles went on the field to try and defend their score, but, try as they did, at the fall of 4 wickets, Sunrise surpassed the score. In that inning, Conway Jones and Michael Sobers scored 21 and 14, respectively, for the home team; while Kevi Flowers took 4 wickets for Western Eagles.

Sunrise now travels to Rancho to play the second game. Before the game, I overheard someone telling Eagles team “be careful of Zaggi and Seguro. They are very good bowlers.” Whether they took the warning or not, these two bowlers damaged them.

On Sunday, Police went to Crooked Tree to finish game one that started the weekend before. Brilliant had scored 100 runs. Arturo Wade had scored 27 for Brilliant, while Walton “Baby Hulk” Banner took 4 wkts for Police. The Cops were short of a batsman, Chris Banner. Without that player, Police had only 10 batsmen. On the weekend before, Police had 26 for 2 wkts. On this day, Police fought hard, but by the time 9 wickets fell, it was over for Police. They scored 99. That was a great loss for Police. They must now do a postmortem, find out what went wrong, and correct it for next year. In that inning, Llewellyn “Luggy” Sutherland scored 15, while Arturo Wade took 4 wkts.

I take this opportunity to congratulate Team Police for their effort; all players had done well. It is heart breaking, but it will heal, special mention to, Howell Gillett, the captain of Police and the two veterans, Sylbert Martinez and Luggy Sutherland. You have made many proud. You two inspired your team, family and friends. Wish you all the best in your endeavors.

Brilliant will now play Wicked 11 on Saturday at Crooked Tree in a two out of three series, in the semifinals. Sunrise travels to Rancho against Western Eagles.

Best of luck to all!