Child, 6, killed in front of mother by speeding vehicle 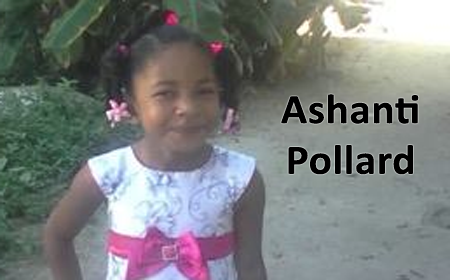 BELIZE CITY, Mon. Feb. 27, 2017–Ashanti Pollard, 6, was tragically killed in front of her mother by a speeding vehicle at around 6:30 on Sunday night.

The Infant 1 student at Wesley Primary School had spent the day with her mother, Dawn Swasey, at the home of another relative in Hattieville, where they had made Creole bun.

However, they returned to Belize City and were walking to their home on Fabers Road Extension when a vehicle struck Pollard from behind, separating her from her mother, whose hand she was holding at the time.

Pollard suffered from head and body injuries and died on the scene. Her mother suffered minor injuries to her left hand, left foot and left hip, all classified as harm by a medical doctor.

The dried-up remains of Pollard’s blood can still be seen at the intersection of Fabers Road Extension and Krooman Road, where she was hit.

The aunt of the deceased, Deshan Swasey, today told our newspaper that her sister only heard a loud bang, and then saw her daughter on the street, bleeding profusely.

Swasey told us that the vehicle did not stop to provide any assistance, and instead, sped off, only to be intercepted by a police patrol unit coming from the opposite direction. She also wanted to mention that the area the accident happened was poorly lighted and was very dark.

She told us that her niece was wrapped in a white sheet by police and taken to the Karl Heusner Memorial Hospital, where she was certified dead by medical authorities on duty. Swasey recalled her niece as being an innocent, loving and energetic child.

The child’s grandmother, Joan Ruth Wade nee Swasey, today told our newspaper that the incident was a sudden thing that has caused great financial expenses. She told us that while she hopes for justice, she also hopes for assistance in burying their child. Those willing to make contributions to the funeral can contact her at 634-7662 or 626-1807.

The results of the child’s post-mortem examination will be available tomorrow, Tuesday.

Today, Monday, police reported that the vehicle that killed Pollard was a silver 4-door Toyota Corolla, at the time being driven by Albert Martinez, 43.

Martinez has since been detained by police pending charges of “manslaughter by negligence, causing death by careless conduct, and driving without due care and attention”.

Police said that they also took a urine sample from Martinez.

However, he will not be taken to court today; that will be done tomorrow, Tuesday, and he will also be charged for the injuries the mother suffered.

Funeral arrangements are underway for Pollard. She was the second of her mother’s three children.