Home Sports “Chito’s Eleven.. the best team that I ever played with.”
Sports

Wellington C. Ramos, former Chito’s Rangers center back and Belize national football team player, responds to Romel Cuello’s article, “A football game for the ages – the Mighty Avengers and Chito’s Rangers,” which appeared on page 6 of Amandala for Tuesday, September 1, 2020. 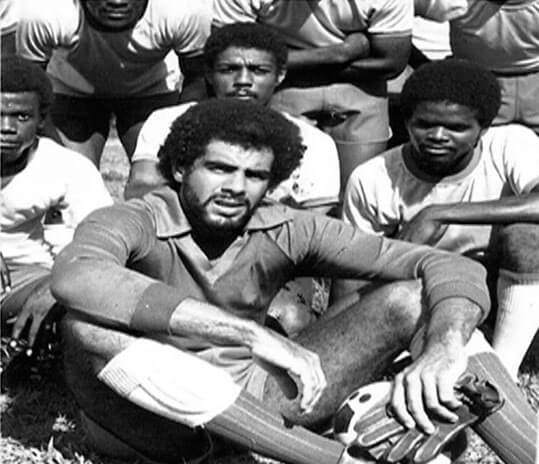 The Editor, Amandala
Sat. Sept. 5, 2020
Chitos Eleven was a football team that was founded by the late Bailar Smith and myself in 1977. That year, I was transferred from Orange Walk to Belize City after playing with the Orange Walk Selection and other teams for two years. Minister Joe Briceno had a falling out with his PUP Government, and Guadalupe Pech, the PUP Minister from Orange Walk South, was pushing for his players from his area to be a part of the Orange Walk Selection team. I told Mr. Briceno that if Mr. Pech insists on bringing players from the South into the team, the selection will break up. Mr. Briceno was in a vulnerable position and he accommodated Mr. Pech with his wishes. Many of the players indicated to me that they were not going to play for the selection if Mr. Pech gets his wish.

All Orange Walk started the season with a new team and began losing their games, so many of my teammates were upset.

Shortly thereafter, I was sent to be the NCO I/C Hattieville, Burrell Boom and Gracie Rock Sibun. I was looking for a new team to play with, but wanted to play for a formidable team. One morning, a young man came into the Police Station and introduced himself to me as Paco Lewis. He said that he heard that I was a football player, and he is trying to organize a team in Hattieville. I told him that I will be on the field that evening to see the players and how they were practicing. Most of the players that I saw playing football that day needed to develop their playing skills, and I was not motivated.

After the game, he said that Bailar Smith, a coach from Belize City, will be bringing up his new team to play against his Hattieville team. Again, I was not too excited, but was looking forward to the game. That Sunday, I saw Mr. Robinson’s bus bringing a group of players to Hattieville. I then left the Police Station with my football gears to play.

The game that the two teams were playing, was not the type of game I had played for many years since I left high school in Dangriga. After the game, Coach Bailar Smith came to me and introduced himself as the former Coach for Berger-404, and I was excited. He said that he was no longer coaching the team, and is starting a new team with the players he brought to Hattieville. I told him that I will be more than willing to help him to get sponsorship and new players to improve the team, and he agreed.

Chito Mai, his family and many other people in Orange Walk District were diehard fans for the All Orange Walk Selection, and they were not happy with the way the team was playing in their Inter-District matches. I told Coach Bailar Smith to come and meet me by Chito’s Vegetable Store on Friday in Belize City, corner Orange Street and Cemetery Road, so we could speak with Mr. Mai about sponsoring the team.

I said to Mr. Mai: “This gentleman is an excellent coach who is building a team, but he needs sponsorship and players. If you decide to sponsor the team, he and I will find the players to make it happen. He will find the players in Belize City, while I will go to Orange Walk and Dangriga to get quality players.”

Mr. Mai said: “Guys, I will sponsor this team,” without much thought; and we began our planning.

Pops Mai, his son took me to Orange Walk Town, and I spoke to Gregsie Jones, Matthew Williams, Enrique Carballo and “High Priest” Contreras. A couple days later I met lawyer Nick Dujon at the Supreme Court building where he was prosecuting a case as a Crown Counsel. He said that he wanted to play football for a team. He had just arrived in Belize, and I recruited him as our goalkeeper. My friend Nolbert Moss was brought from the Dangriga Selection as a defense, and Charles “Paco” Lewis from Hattieville as one of our midfielders. Coach Bailar Smith brought in Fabian Rivero, Harrison “Salad Oil” Flowers and Ricky Gongora from his old team, Berger-404.

We agreed that the players from outside of Belize City will be allowed to practice with their district teams; while we who lived in the city were going to practice at the corner of Central American Boulevard and Cemetery Road.

Pops Mai was an admirer of the Brazil National Team, so he chose green and yellow as our team colors. He said that he and his brother Landy were both going to travel to Chetumal to purchase the uniforms, and they did.

This is how the team that would later become one of Belize City’s and the nation of Belize’s most explosive teams began.

In that game that my friend Romel Cuello is referring to, we were leading Avengers 2-1, and they were trying their best to come back into the game. Pappy Smith passed a ball to Tash Gutierrez, and he kicked the ball over our goalkeeper Dujon’s head. I read the play and ran inside the goal and did a bicycle kick to save the goal out of the left corner web. In football, a bicycle kick, which we also call “Chalenas,” is always a beauty to watch, either scoring or saving goals. While the people were screaming “Goal!!,” they did not know that the goal was already saved until they saw the ball on the field live. I think that save broke the hearts of Avengers players, and the game ended shortly thereafter.

Tash was one of the greatest strikers Belize ever had, and he was what we called in those days a “Goal Greedy.” Whenever Dujon, Tash and I meet, we always mention that shot.

Playing for Avengers was also my cousin, the late Michael Martinez, better known as “Lacio”. I had the privilege to play with and against him. We played together for Police Invaders in Belize, and Bellway and Ubafu here in New York City. He was a deadly striker as well, with years of experience scoring goals. He ended up playing for Chito’s Eleven after I left the team in July of 1978 to come to the United States. Chito’s Eleven also defeated Universidad De Guadalajara that same year.

P.S. – BETTER PICTURES OF CHITO’S RANGERS NEEDED. IF YOU HAVE ANY, PLEASE SEND THEM TO ME AT: [email protected] Thanks.