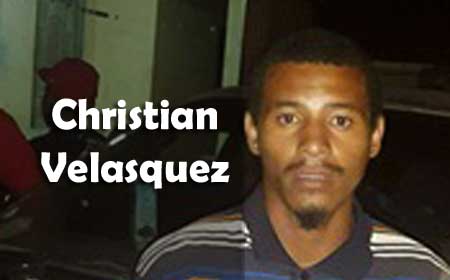 BELIZE CITY, Thurs. Aug. 10, 2017–Christian “Flash” Velasquez, 23, was shot and killed in a drive-by shooting at about 11: 00 last night on Antelope Street Extension. The young man, who is the son of popular Neal Pen Road vehicle electrician and mechanic, Victor Velasquez, also known as “Flash”, was shot in the chest and back and reportedly died on the spot.

In an interview this evening at the Racoon Street Police Station, Superintendent Daniel Arzu, Deputy Commander of Southside Belize City Police, said that they believe Velasquez was not the target of the gunman. Police believe that he was at the wrong place at the wrong time.

Two expended 9mm shells were found at the scene.

Arzu, at the press brief, said that the vehicle used in the drive-by shooting had been found and is being examined by officials of the National Forensic Science Service. Police investigations have led them to two men, whom they have detained.

Witnesses said that at about 10:45 last night, Christian was socializing with friends on Antelope Street Extension when his friends “scattered” when they saw a vehicle coming.

Christian did not run. The vehicle approached, someone inside it fired the fatal shots, and then the vehicle drove away.

Christian was taken to the Karl Heusner Memorial Hospital, where he was declared dead on arrival.

Victor “Flash” Velasquez says the death of his son is a great loss to him, his family, and the city. He said his son was hardworking and reliable. Those who knew the youth say that he was helpful and mannerly.

Christian worked with his father at the workshop and he became good at diagnosing and repairing faulty starters and alternators.

This evening, Amandala visited the grieving father. He was repairing a starter, and he told us, “This is where I miss Christian, because he would have already taken down the starter and I would be doing something else.”

Christian Velasquez is survived by his two children, his mother and father, four sisters, one brother, and many other relatives.