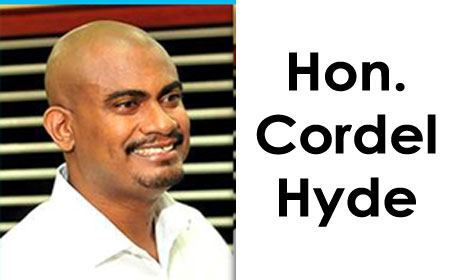 BELMOPAN, Cayo District, Mon. Dec. 12, 2016–Hon. Gaspar Vega refuses to resign as the UDP’s Orange Walk North area representative in the face of previous scandals in the Lands Department, of which he was the Minister, and now, more damning scandals surrounding himself and his family have emerged.

In the latest scandal, 1,600 acres of farmland on the Philip Goldson Highway, just outside Carmelita in Orange Walk District, ended up in the hands of Vega’s relatives while he served as the Minister of Natural Resources. The 1,600-acre farmland, originally Government land, was subdivided into 55 parcels and initially transferred from the Ministry of Lands into the hands of selected individuals according to documents leaked to our newspaper from sources close to the Lands Department.

Those individuals then flipped the land to members of Vega’s family, including his brother, Ignacio German Vega, and his company, German Vega & Sons Import Limited.

In total, German Vega and his company acquired 33 of the 55 parcels of land, all from persons who are allegedly close to the former Minister of Lands.

According to PUP Deputy Leader Cordel Hyde, who dropped the bombshell in the House of Representatives last Friday, “It is a crazy coincidence that all these people with properties right next to each other all agreed to sell their land to this one family – the Vega family.”

Documents we have reviewed at Amandala show that the lands were transferred by the Ministry to citizens for as little as $800 in one case, and as high as $8,939.38 in another. These were mostly 25-acre plots. Strangely, weeks, sometimes months after these lands were transferred from the Ministry, all of them were quickly sold to the then Minister’s wife, and his brother.

According to Hyde, records reveal that the Minister’s wife, Marilene Roxanne Vega, bought 14 of the parcels of land in question.

Additionally, several of the land transfer documents did not show any sale price.

A review of the leaked documents revealed that in one case, the then Minister Vega transferred 91.95 acres of prized land for only $3,669.38 to Hilmar Alamilla, of #2 Liberty Avenue, Orange Walk Town. However, that price was amended on the transfer document we saw and the price of $8,937.38 was penciled in, at the top.

Readers will recall that Alamilla had been previously named in several scandals involving the Ministry of Natural Resources, including the one that led to the Minister’s resignation from Cabinet.

Our newspaper had named Hilmar Alamilla weeks ago when, in a lucrative transaction, he had bought 1.057 acres of land near the Haulover Bridge from the government for the discounted rate of $2,500 and then turned around and sold it to Andre Vega, son of Gaspar Vega, for $15,000. The Government of Belize later awarded the young Vega $400,000 as compensation after it was discovered the land had already been privately owned.

Previously, Alamilla surfaced in the news after he had been named in the plundering of the highly coveted rosewood when a national moratorium had been in effect. In fact, it was $400,000 worth of rosewood that the Forestry Department confiscated from Alamilla that the then Senator Minister, Lisel Alamilla, had famously burned.

In the most recent scandalous transaction of which he is accused, Alamilla had received the land, Block 4 Parcel 1582, on June 21, 2011, but 5 months later, on November 23, 2011, transferred the land to Marilene Roxana Vega at a price of $23,000 according to the leaked documents.

Incidentally, the transfer from Alamilla to Marilene Vega was signed by Justice of the Peace Derrick Gillett.

(Back in 2010, Gillett had received a sky-high land compensation payment after the Ministry of Natural Resources gave him a piece of land that had already been privately owned by Silvio Correa of Orange Walk Town. Correa challenged the Lands Department in court and won, and Government then went on to compensate Gillett with $148,000 instead of giving him another piece of land as a replacement.)

Alma also received $23,000 in consideration for her acreage, but there is some dispute as to what she actually paid Government, because the original figure of $2,777.67 was marked out and the figure of $5,271.67 was penciled in at the top.

Derrick Gillett again signed on to this transfer. He signed as a witness on 12 of the 55 land transfers in question.

According to Hyde it appears that there was a lot of sloppiness involved in the official documentation of these transfers. A number of the land transfer documents did not contain any price, and in several instances, the figures were marked out and another figure placed at the top.

Additionally, on at least 9 occasions, Hon. Gaspar Vega, in his capacity as then Minister of Lands, transferred the land to the individuals on September 2, 2013, but the land was sold or transferred to German Vega & Sons Import Ltd. on August 27, 2013 – that’s 5 or 6 days before the individuals supposedly received the land transfer from GOB, Hyde explained.

In other words, the land was transferred to the Vegas before it was even transferred from Government.

But in the case of one family in the north, the Sealey family, they were lucky to receive 8 parcels of land. The documents we reviewed show that Saloman, Jane, Carla, Carl, Kenisha, Lincoln, Lillian and Linda Sealey all got a parcel of land inside the said 1,600 acres, and they, like the Alamillas, all dutifully sold their parcels to the Vegas – 8 parcels, a combined 200 acres, Hyde explained in his presentation.

Hyde concluded: “Here we are, our economy on life support, more than half of our people languishing in poverty, while for the select few – the friends and families of the government – life could not be better.”