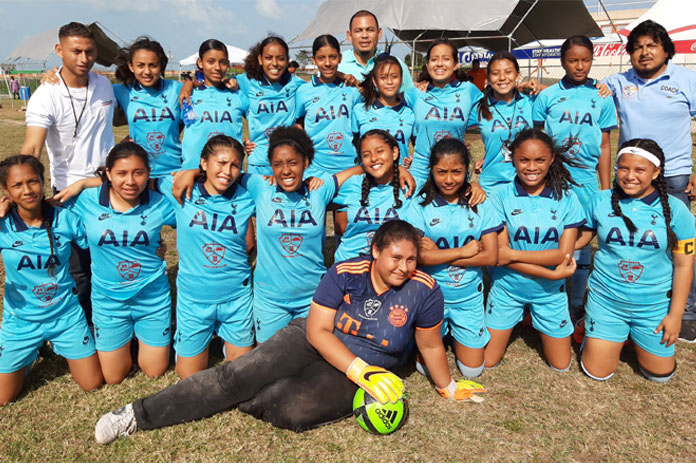 BELIZE CITY, Thurs. Feb. 20, 2020– The National Secondary Schools Sports Association (NSSSA) held its 2020 national high schools football championships over the weekend with male and female games on Friday and Saturday, February 14 & 15, at the Marion Jones Stadium in Belize City, where this year’s Nationals were hosted by Pallotti High School.

The four regional champions – North, Central, West and South – in both male and female categories, played a simple knockout format, whereby the losers on Friday afternoon played the consolation third-place match on Saturday morning, while Friday’s winners clashed for the championship on Saturday afternoon.

After the finals, team trophies and individual medals were issued to the 1st, 2nd and 3rd place teams, as well as individual awards to outstanding players, which were presented by Pallotti High School principal, Sister Clara, assisted by NSSSA President, Keith Madrill.

In (F) game 1 on Friday afternoon, (WEST) Belmopan Comprehensive School (BCS) won, 2-0, over (SOUTH) Delille Academy, with Jeily Corado netting both goals for BCS. And in (F) game 2, (NORTH) Corozal Community College (CCC) won in overtime, 2-1, over (CENTRAL) St. Catherine Academy. Carlene Tillett put SCA in front in first half; but CCC equalized through Anahie Blanco from the penalty spot in second half; and Yasmine Diaz got the game winner in overtime for CCC.

In Saturday morning’s 3rd place game, it was 1-1 in regulation between Delille Academy and SCA, after Ceneia Apolonio gave Delille the first half lead, and Carlene Tillett equalized in second half for SCA. They remained tied in overtime, and in the penalty shootout, Delille prevailed, 4-2.

The championship match on Saturday afternoon was scoreless in regulation, and in the penalty shootout, they were also tied at 3-3 after the first 5 penalty kicks. Thereafter, it was sudden death, and after 11 kicks taken by each side, it was CCC girls with the 7-6 victory over BCS.

Only 1 goal was scored in the championship match, and it came in the 9th minute of overtime, when Kayser Tut scored a left-foot “chilena” a minute before the long whistle, to give Mount Carmel boys the 1-0 victory over Belize High School of Agriculture.