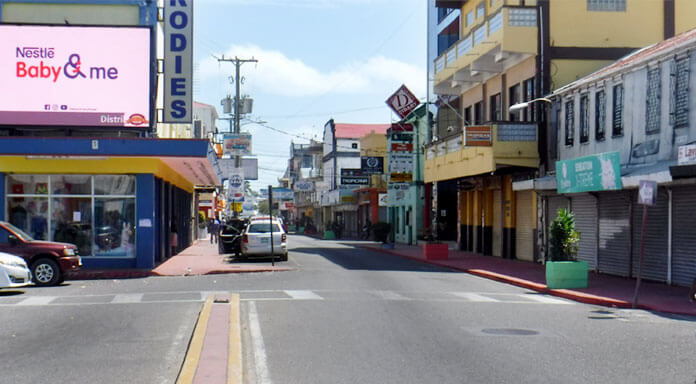 The nation is now in a national State of Emergency

BELIZE CITY, Thurs. Apr. 2, 2020– Belizeans all across the city were seen in lines at grocery stores, banks, credit unions, utility companies, and everywhere else in between where business is conducted, as the city prepared for what became the new normal after midnight last night, when the country of Belize slipped into a national State of Emergency that the government declared in its fight against the dreaded COVID-19 pandemic.

At midnight last night, the ordinary freedoms that Belizeans have become accustomed to and which are guaranteed under the Belize Constitution were put on hold, as the Emergency Powers Regulations 2020 came into effect.

On Orange Street, the stores were also closed

Under the national State of Emergency, freedom of movement is curtailed and Belizeans are to remain indoors and can only come out to purchase the necessary provisions or for medical attention. There are, however, persons whose work has been included in a category of services which are deemed to be essential, and these people will have to report to work. All other businesses that are not considered essential services are to remain closed during the month-long state of emergency.

In its fight to prevent the cruel coronavirus from spreading beyond the three confirmed cases in Belize, the Ministry of Health has issued a number of directives in order for us to battle the coronavirus.

Apart from the government’s order that Belizeans remain in their homes all across the country, the government has also implemented a curfew which starts at 8:00 p.m. tonight, Thursday, and will run until 5:00 a.m. tomorrow.

Persons who are found in violation of the curfew anywhere in the country will be subjected to arrest and a charge for violating the curfew. The law also applies to the media. Attorney General and National Security Minister Michael Peyrefitte has not so far indicated whether passes might be given to print media personnel, who would normally work late into the night.

During the period of the national state of emergency, the security forces, the Belize Police Department, the Belize Defence Force (BDF) and the Belize Coast Guard are tasked with the enforcement of the curfew.

In implementing the national state of emergency, Belize joins many other countries around the world that have adopted similar emergency measures to combat the extremely dangerous coronavirus that has overwhelmed the health care systems in the countries which have become its epicenter, including very rich countries such as the USA.

On Tuesday, Peyrefitte explained at a government press conference that if it is not necessary for the country to be under the national state of emergency for the entire month, it would be lifted before the month is over.

If Belizeans adhere to the social distancing rules that are now in place and remain isolated in the confines of their homes, while at the same time adhering to the Ministry of Health recommendation of hand-washing, then Belize could stand a good chance of preventing the horrific disease from engulfing the country.

Belizeans, be sensible – this virus’ attack on our nation is real, and very dangerous. To be safe, observe the Ministry of Health’s guidelines, and use common sense when you have to leave your home, for any reason at all.

The virus does not move by itself – it is people who move it from place to place. We can contain the coronavirus, but it takes all of us, acting sensibly, to defeat it.