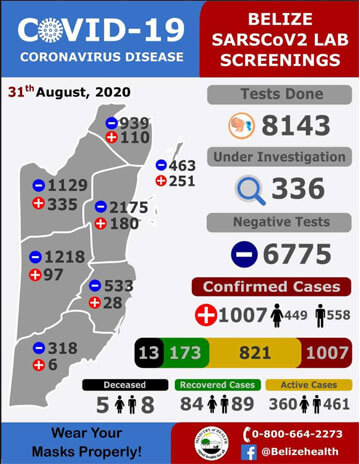 BELIZE CITY, Mon. Aug. 31, 2020– Today, a late press release from the Office of the Director of Health Services announced that the total number of COVID-19 cases is now 1,007 — a number that is 14 cases higher than the figure that was released on Sunday, August 30, 2020.

Said the release: “A total of 93 samples were processed today, and 14 new cases were identified as follows: 1 in Belize District (Ladyville); 3 in Toledo; and 10 in Orange Walk (Orange Walk Town, San Felipe, Santa Marta, Guinea Grass, San Pablo, San Jose, Trinidad). There are a total of 56 recovered cases.”

On Saturday, August 29, a record number of COVID-19 cases were identified in Belize. Of 343 samples processed, a total of 94 new cases were found. These new cases, along with an additional 29 cases reported on Sunday, have raised the total number of active cases to 993, just 7 cases shy of 1,000.

It was also reported that a 13th death related to COVID-19 was recorded on Saturday. This patient was a 50-year-old female who was hospitalized in the Karl Heusner Memorial Hospital (KHMH) for over two weeks. The Director of Health Services shared that this person was intubated and in critical condition for some time. Three persons remain intubated at the KHMH at this time — 2 males and 1 female.

The Office of the Director of Health Services has consistently released a detailed breakdown of the location of new cases as new numbers become available in an effort to keep the public informed of COVID-19 hotspots. A community breakdown of the 94 cases found on Saturday shows 26 appearing in the Belize District, with 17 popping up in San Pedro, 8 in Belize City, and 1 in Lords Bank.

In Cayo, 7 new cases were found in 5 areas — 2 in Belmopan, 2 in San Ignacio, and 1 each in Benque Viejo, Santa Elena, and San Jose Succotz.

Corozal also had 7 new cases, 4 of which showed up in Xaibe, 1 in Corozal Town, and 2 in Caledonia.

The Orange Walk District can be considered as our new local epicenter, with a total of 326 cases to date. Of those cases, 67 (45 and 22 cases) were found just over this weekend.

The breakdown shows infections in 14 different areas in Orange Walk. Two members of a family in San Felipe have since succumbed to the coronavirus.

Four cases have appeared in San Jose, 3 in Yo Creek, and 2 in Carmelita and Guinea Grass. Ten (10) other villages in the Orange Walk District have recorded 1 case each.

In Stann Creek, 9 new cases were detected among the samples processed over the weekend. Five (5j of these were found in Independence, 2 in Dangriga Town, and 2 in Hope Creek.

The office of the Director of Health Services (DHS) said that they are saddened by reports that big parties are still taking place in the country, despite the 10-person limitation put in place by legislation. “Big parties are still being reported in communities across the country; this will not help in flattening any curve”, the DHS said.

Recent data released by the University of the West Indies show similar trends in the number of cases showing up in CARICOM countries. In particular, countries with land borders like our own, such as Guyana and Suriname, have been having experiences similar to Belize’s, as it relates to their growth curve.

The DHS noted, “Growth curves similar to ours can be seen in the Bahamas, Jamaica, Guyana, Suriname, and Trinidad & Tobago.”

A recent infographic created by Kevin Chen and verified by the Ministry of Health shows Belize as having conducted the most tests per 100,000 persons in our region as of August 28, 2020.

The information shows 1,912 tests done per 100,000 persons, putting us ahead of Mexico, Guatemala, and Honduras, our direct neighbors.