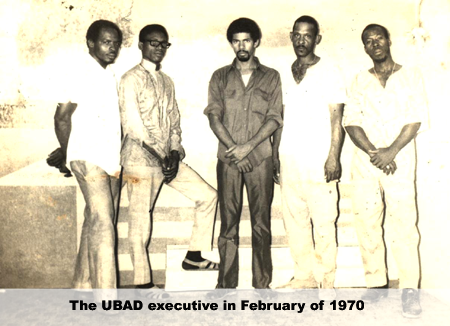 The course marked my first encounter with the PUP government, and they won that preliminary.

It was about two weeks before they closed down the course that Said Musa had called me at Technical and asked me to be the opening speaker on Radio Belize in a series to be called THE LECTERN.

Musa and I had met some time before and he seemed progressive in his thinking. My speech on Radio Belize, entitled “Student Power,” broadcast on October 13, 1968, eventually ended up in a discussion of Black Power when students from St. Hilda’s College asked a few questions.

I know for a fact that Rogers (C. L. B.) listened to that speech, and he probably decided then that my ideas were not conducive to his type of hustling. In any case, you, the reader, can check out the sequence of events. Rogers listens to speech on October 13; a few days after, Lightburn makes his appearance at lecture; a few days after, course closed down.

This is standard Lightburn-Rogers operating procedure, as we in UBAD can attest after eighteen months of fighting this stagnant, decadent, and tyrannical system. It was Lightburn and Rogers who organized the deportation of Michael Allen, a white cat who used to drive children to the UBAD breakfast program in the summer of 1969; it was Rogers who organized the kidnapping of Marvin X Jackmon from my home in Belize City.

Lightburn is allowed a free hand to play the hellion around town, with the tacit consent of Price, Rogers, et al. So far he has not jumped any UBADers. When he does, you might hear something about it. Dig.

Along about the time of the closing down of “The Black Man in American Literature,” I started suspecting that my job at Technical was not going to last too long.

The previous English teacher at Technical, Milton Arana, had resigned suddenly in early September and gone to England to get his Master’s. Clive Gillett, the Technical principal, offered me the job in the middle of September, there being no one else in the country qualified to handle the post.

I started teaching in late September at Technical. They had me on a $3.00 an hour basis.

Government advertised the vacancy for Arana’s post once in the Government Gazette, in September. There was nothing said after this. I asked Gillett if I would be appointed. He said yes, as soon as they sorted things out. Later, I asked him again. He said that the Public Service Commission had just finished handling so much business connected with education (namely the Junior Secondary School which was being started, he said) that they were moving on to something else, and the question of my appointment to the teaching post could be taken in up January (1969).

Finally, in the middle of November 1968 I went to see him again and asked him if I would be paid over the Christmas holidays, since I was on an hourly basis. He said no. I said I would stop teaching. He said he would try to straighten it out, and the next day they changed my standing to that of temporary teacher, which would enable me to get my Christmas pay.

In the middle of December Silky Stewart came to see me. He was very mysterious and secretive. I gathered there was some important person who was interested in reviving a black movement. About six o’clock that evening he took me to see Lionel Clarke at the Princess Royal Youth Hostel. Clarke is Warden of the Hostel, He is a big and dramatic man. I couldn’t figure him out.

In any case, I met for the first time that same evening, Robert Livingston, whom we all called “Rasta.”. Livingston was Acting General Secretary of the Universal Negro Improvement Association (UNIA). Between the four of us, we planned a strategy of infiltrating the UNIA as members. Then we would try to become officers of the organization and radicalize it into a black power unit. Clarke said that the UNIA was a long-established organization and therefore it would be difficult for the government to attack us as UNIA executive and members.

Of those present, I dug Livingston, and still do, even though we became pretty sure that he was working for Lindy Rogers.

Anyway, Livingston got a copy of the UNIA constitution for us, and we soon saw that the constitution rendered it very difficult, almost impossible to infiltrate the organization successfully.

Now this is coming on to Christmas.

Right about this time Said Musa calls me on the phone, wants to know if I’m interested in a graduate demonstration against the racist, imperialist John Wayne picture, “The Green Berets.” I said yes. What the hell.

Musa and Assad Shoman came to my house (No. 4 Kelly Street) one evening with a paper they wanted mimeographed. Over Gillett’s objections we did the job on the Belize Technical College Gestetner machine (it was holiday time at the school). I had met Assad Shoman a few weeks previous to this when he, Derek Courtenay, and myself were the panelists in a discussion at the Bliss Institute entitled “The Role of The Educated Man in Society.”

I decided to introduce Silky Stewart and George Flowers to Musa as brothers who might be interested in the demonstration. The group, later to be known as the “Ad Hoc Committee for The Truth About Vietnam,” held meetings at the homes of Musa and Shoman to plan the demonstration, scheduled for the first showing of “The Green Berets” on January 1, 1969.

Lionel Del Valle was present at meetings. Ronald Clarke visited one meeting. YasinShoman, Musa’s wife, Shoman’s wife, and an Englishman who was teaching at the UWI also attended.

There was much more going on in the Ad Hoc Committee than I was digging.

Either on Christmas Day or Boxing Day of 1968, Bert Franklin, a brother now studying at the UWI introduced me to Galento Neal, now Galento X Neal, vice-president of the UBAD Party for Freedom, Justice, and Equality. At the time Galento used to do steam pressing on New Road in front of Bunny The Barber and next to Alamilla, a jeweler.

Livingston was encouraging me to start lecturing on Black History again. He said that he, as Acting General Secretary of the UNIA, could allow me to use Liberty Hall. I told him I was thinking about it.

The first demonstration against “The Green Berets” by the Ad Hoc Committee was held on the night of January 1, 1969. I demonstrated that first night, although Livingston came up to me while I was carrying a placard and told me to “leave this thing alone.” As a matter of fact, there appeared in The Reporter that week a photograph of me and Livingston talking.

A surprise demonstrator (to me, at least) that first night was Derek Courtenay. Couldn’t figure that out.

Neither Stewart or Flowers demonstrated.

I did not demonstrate after the first night. The demonstration lasted three or four nights and on the last night of the demonstration I was lecturing at Liberty Hall, me and Livingston. There were about seven people present. Among them were Louis Belisle, the painter; Mineral Bramletter and his wife (American citizens); a Special Branch named Rodriguez; and Livingston. Galento claims that he was there. But I believe it was his brother “Kruschev” (Rudy).

After the meeting (three hours long), Bramletter and his wife walked me home, telling me all the bad things that would happen to me, being shot, etc. Bramletter was a brother that was definitely way out.