Home Features Why Dante, Ebony, Robert and Selvyn are so special!
Features

Why Dante, Ebony, Robert and Selvyn are so special! 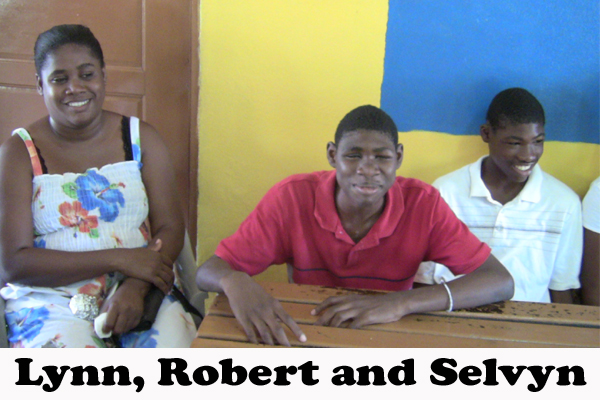 Disability Week concluded last week, but for the remainder of the month of December, the showcase of differently-abled children by a group of activists from Stella Maris School will continue.

As a follow-up to last week’s article, Amandala presents this feature story on three parents and the differently-abled children with whom they share many fun moments. Indeed, life can become a challenge when caring for people with special needs, but the light moments of humor these parents share with their children make the experience not just livable – but also loveable.

Lynn Santos is the mother of Selvyn and Robert Kelly, both students of Stella Maris School. While Selvyn moves on at the end of this school year — hopefully to a vocational school where he can master cooking enough to live out his dream of becoming a chef, Robert still has a few years more in school.

Robert, 13, is blind, but there is hope—a 50-50 chance—that he could see again one day. Robert and his mom had traveled to the USA when he was a baby with the intent of getting him an eye operation, but the logistics didn’t work out, and they had to return home. They have still not lost hope that someday soon he can get the support he needs to get the eye operation.

Santos spends the day at school with her children, and the demands of this responsibility are substantial.

“As a mother, it impacts our lives hard. Our other children who do not have a disability believe we are giving the child with special needs all the attention and we have to explain to them that they [the special needs children] need more attention,” Santos shared.

The organizers of Disability Week hope that the wider community can become more aware of issues surrounding disability – so that the Belizean society can help break the barriers that confront differently-abled children and open doors for a better life experience.

Her mother, Verna Gordon, told us that Ebony, now a teenager, lost her hearing at age 4 due to an infection. Up to two years ago, she was being educated in the public school system, but she later decided to enroll her in Stella Maris, where the mom is now content with the specialized care her daughter is receiving.

We also had a chance to meet Dante Heusner, 8, who has cerebral palsy. His caregiver, Senia, said that Dante’s strength is his love for others. Dante loves school and he loves to interact with students and teachers.

He communicates via sign language, and when we spoke with him, he responded with facial gestures, which his babysitter interpreted for us.

Senia told us that one of Dante’s favorite experiences is riding the school bus with other students.

Dante is very aware of his environment and can identify objects when asked, such as the fan, light and television.

While Dante’s preoccupation is people, both Selvyn and Robert seem to have a fantastic preoccupation with food. They listed all the niceties they had helped to prepare for last week’s Open Day: cupcakes, journey cakes, orange juice, lime juice, and chips and dip.

Robert offered to sell us some chips and dip for only 50 cents!