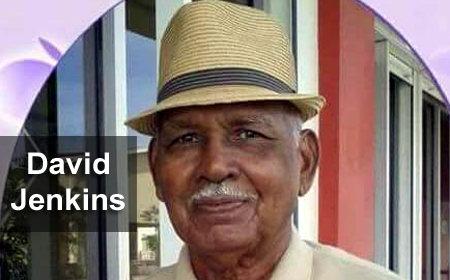 BELIZE CITY, Thurs. Apr. 20, 2017–Amandala was saddened to receive news this week of the passing of David Emmanuel Alexander Jenkins, Sr., 83, who worked for several years as the newspaper’s photographer.

He died from kidney failure. His daughter, Vanessa, said that her dad opted not to go on dialysis, saying, “I lived like a man; I will die like a man.”

“Even in death, he taught us a lesson in bravery, character and staying true to himself,” she told us.

Jenkins is also remembered by friends as the electrical engineer who for a one-time fee unscrambled television signals for poor Belizeans when access was limited to “pay per view” basis. According to Manolo Romero and Hector Silva, Jenkins opened access to television when it was limited to the wealthy.

“Part of the fallout of that liberation of the airwaves was that most Belizeans became fanatics of the Chicago Cubs as WGN was the station broadcast over the air at the time,” Romero said, in a social media post.

“Mr. David Jenkins, Sr., likewise, served in the Belize Volunteer Army. On the patriotic angle, Mr. Jenkins played an important role in his suggestions for the composition of our national flag,” Silva said.

He is predeceased by his son, David, Jr. He is survived by his mother, Hazel Baptist of Los Angeles; his wife of 61 years – Joan Jenkins nee Price; 4 daughters – Martha Jenkins and Vanessa Jenkins Young of New York; and Cynthia Jenkins and Diana Jenkins Fuller of Belize City. He is also survived by 11 grandchildren, 10 great-grandchildren and a host of other relatives and friends.

According to an announcement from the Jenkins family, they are calling all family and friends to a celebration of the life of their patriarch.

The family is asking that in lieu of flowers, donations can be made in his name to St. John’s Cathedral.

Amandala sends its heartfelt condolences to the family of Mr. Jenkins.