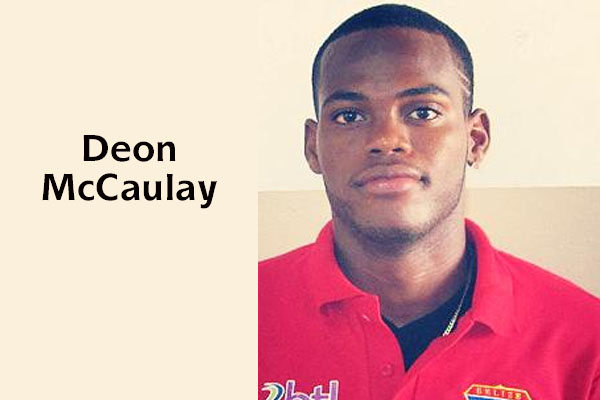 National team striker Deon McCaulay, who is presently tied for the goal scoring lead in the Premier League of Belize Opening Season competition, flew out from the Philip Goldson International Airport this afternoon en route across the Atlantic Ocean to the European nation of Greece, where he is slated to participate in tryouts before hopefully signing with the AEL Kallonis football club in the city of Kalloni, Greece.

The recent Gold Cup in the U.S. was considered a perfect stage for Belizean stars, especially Deon, to secure a contract with a professional team in the international arena. But Deon was not at his best in that tourney due to injury, and has just recently returned to his goal scoring form.

Deon leaves behind, aside from relatives and friends, his Belmopan Bandits team which is presently involved in a very tight race to the playoffs in the Premier League of Belize 2013-2014 Opening Season competition. With his goal this past weekend in the Bandits’ 2-1 win over Verdes FC, Deon had secured a tie for the goal scoring lead along with Franz Vernon of league leading Paradise/Freedom Fighters with 5 goals.

At the sports desk we join Belizean fans countrywide and abroad in wishing Deon success in this venture.