Did relaxed standards lead to faulty Meds at KHMH? 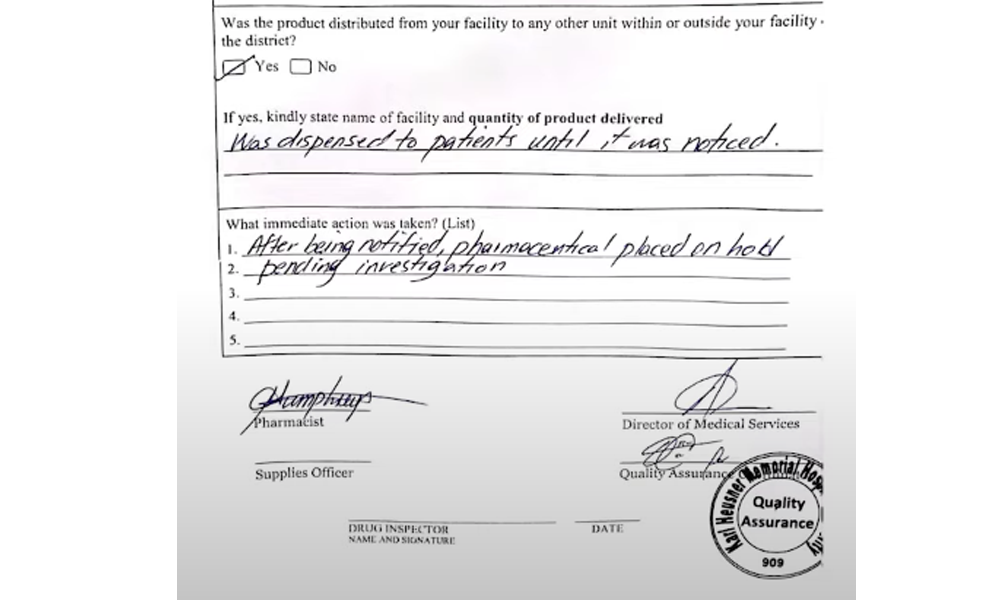 Medications for this tendering cycle are trickling into the country, after delays in the last three months of 2022, said Minister of Health and Wellness, Kevin Bernard during an interview this week. Minister Bernard was cornered and questioned by local reporters about recently leaked “Pharmaceutical and Medical Equipment and Devices Quality Assurance Product Report Forms”, which reveal the presence of defective medication and medical equipment among the inventory at the the national referral hospital, the Karl Heusner Memorial Hospital (KHMH), and the Northern Regional Hospital. In total, 7 products—6 medications, and one medical item—were found to be of substandard or degraded quality by pharmacists and the Director of Medical Services.

Among those defective products were 90 bottles of Dicloxacillin, an antibiotic powder found to have black particles; 5,000 units of Erythromycin, oral tablets which were to expire in February of this year and had brown spots; approximately 4,950 defective units of Gemfibriozil, which had a visibly disintegrated coating and compromised surface, and lubricating jelly on which some sort of mould had started to emerge. All these reports were made in 2022, and the products have long since been taken out of the hospitals. But questions remain about what breakdown in quality assurance could have led to the slippage of these faulty medical supplies into our healthcare system.

It is to be noted that the medication which is distributed to hospitals across the country is sent from the ministry’s Central Medical Store, and the CEO at the KHMH, Chandra Cansino, told 7News that the hospital quality assurance team often carries out these types of evaluations, removes bad products, and makes a report to the Ministry of Health and Wellness. The KHMHAU had no comments to make on this matter, noting that they did not have the evidence on the basis of which to make a remark.

In 2021 the Ministry of Health and Wellness made a policy change to allow potential importers of medical supplies, a number of which were new entrants in the process, to be awarded tenders to supply medication to the public sector without having to show a certificate of Good Manufacturing Practices (GMP) for those products, as was previously the case.

At the time, then Minister of Health and Wellness, Hon. Michel Chebat, argued that the strict requirement made it difficult to obtain certain basic known brands. He suggested that the implementation of Good Distribution Practices (GDP) certificates as a qualifier for importation would instead “open the market for quality medication” for Belize.

His commented during a House Meeting, “The opposition has caused some confusion in the public domain as it relates to GMP. What the UDP did during their time was to skew the purchase of medication and pharmaceutical supplies to their preferred suppliers, thereby hurting the Belizean public who were denied access to quality medication. Known brands such as Excedrin, aspirin, Tylenol, and Aleve became difficult to obtain. Manufacturers such as GlaxoSmithKline, Bayer discontinued their distribution of good medication to Belize. This is in addition to known generic brands, major and quality choice that could be imported. By adding GDP as a qualifier, what this administration has done is to open up the market to quality medication for the benefit of Belizean people.”

Suggestions now are that in the absence of the GMP certificate, substandard medication and faulty medical supplies and equipment have begun to make their way into the country more easily. Health Minister Hon. Kevin Bernard has refuted this assertion, however, and is claiming that such insinuations that the ministry is purchasing inferior medication due to doing away with the GMP certificate requirement are farcical. He did acknowledge, however, that “it is something that I need to clarify at the ministry.”

Hon. Bernard, responding to 7News’ prior comments and questions posed to him, said, “Let me make a correction, and I hope that the other media houses can make this correction, because, on his talk show, he mentioned that the former minister, through an amendment took out the GMP requirement. He’s either being disingenuous or plain liad, to be honest with you. Because the amendment, and I will share with the media which I have right here, clearly states in here that a valid good manufacturing practice or good distribution practice certificate.”

While the GMP requirement remains in place, importers need not show that certificate as long as they possess a GDP certificate—which has likely opened the door for the importation of lower-quality medical products. Minister Bernard said, however, that this will not be the case, and that “serious and intense inspections are done at the suppliers.”

He said that it is now customary for the Drug Inspectorate from the Health Ministry to go inside hospitals and conduct checks on medical supplies. He said, however, that they will continue the new tendering cycle under the 2021 SI, which gives importers the option of foregoing the presentation of the Good Practice Certificate.